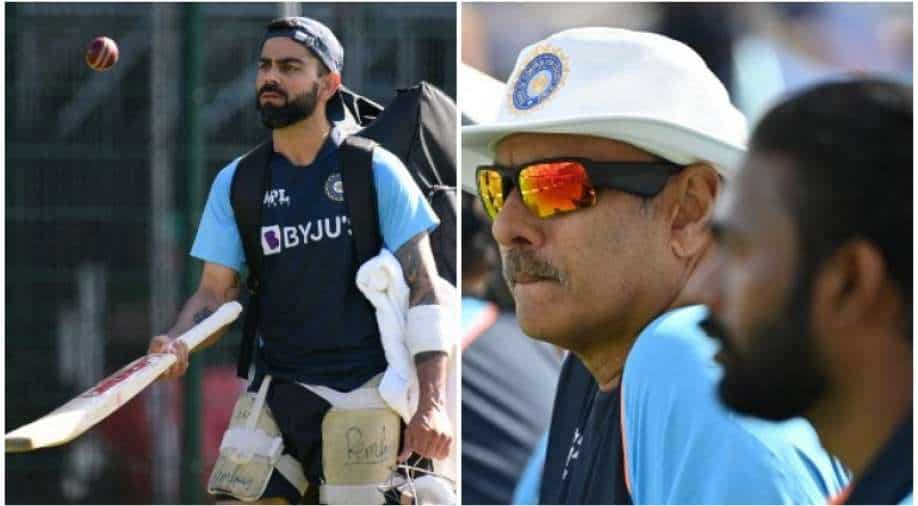 Former Indian head coach Ravi Shastri suggested how Virat Kohli can revive his form and come to his usual best, across formats, during a conversation with Rawalpindi Express Shoaib Akhtar.

A lot has changed in Indian cricket in the past few months, especially in the senior men's team. Rohit Sharma has been appointed as the limited-overs captain, after Virat Kohli resigned as the T20I captain and was sacked as the ODI skipper.

After the India-South Africa series, in the rainbow nation early this year, Kohli also resigned as the Test captain. Many believe his fallout with the BCCI and India's T20 World Cup debacle were the reasons behind the 33-year-old resigning from captaincy altogether. Moreover, Kohli's own form hasn't been as per his standards, even though he continues to contribute with vital fifties across formats.

Thus, former Indian head coach Ravi Shastri opened up on Kohli's decision of quitting as Test captain and also suggested how the right-hander can come back to his usual best with the bat.

Speaking to Shoaib Akhtar for the former Pakistan cricketer's YouTube channel, Shastri opined on Kohli's recent decisions and said, "The pressure started building. People were looking for opportunities. No human being is perfect. I have seen greats of the game quit captaincy to focus on their cricket whether it's Gavaskar, Tendulkar or MS. He played 94 (90) Tests, he could have easily played 10 or 15 more matches but he gave it up.

"He realises he is 33, he realises he has 5 years of good cricket ahead of him. If he can calm down, focus on his batting, take one game at a time, probably take a break from the game as well, I think, if he goes out for 2-3 months, if he takes a break from one series, it will do him a world of good," Shastri further suggested.

He added, "I think, with Virat also he realised it was getting to him, especially in this bio-bubble environment, leading in all 3 formats of the game. You can't take a break also. He did the right thing by quitting from white-ball cricket. When it came to Test cricket, I was a little surprised because for the last 5 years we were the No. 1 team in the longest format of the game.

"After one series defeat, it doesn't mean he had to quit captaincy. At the end of the day, I always respect a cricketer's judgement because I don't know what he is feeling. Sometimes when it comes to here (neck), your body tells you 'enough'."

Kohli will next be seen in the forthcoming India-West Indies ODIs and T20Is at home. The WI tour of India commences on February 6 with the three ODIs to be held in Ahmedabad whereas the T20Is will take place at Eden Gardens, Kolkata.