If we keep winning medals, Hockey will garner admirers in India: Mandeep Singh 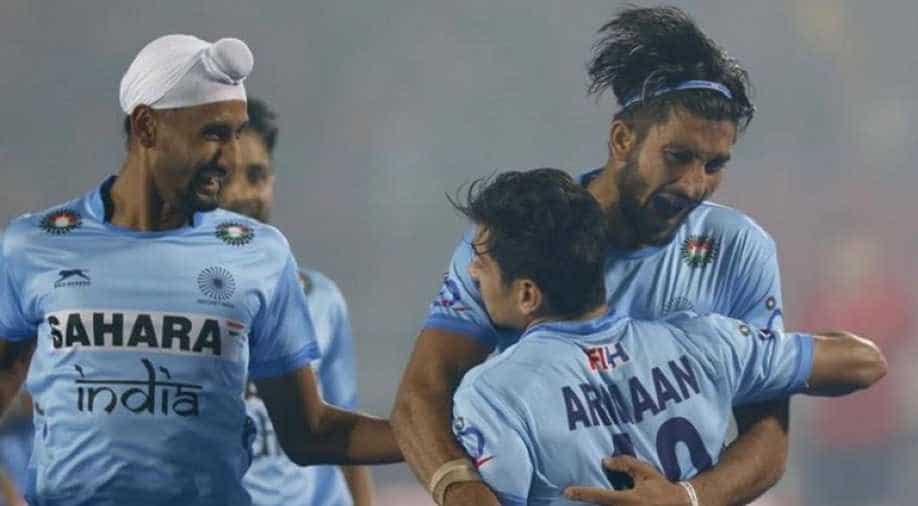 The Indian team would next be participating in the Olympic Test event which is slated to begin from August 17 in Japan.

Indian hockey player Mandeep Singh on Tuesday said that if the team wins laurels for the country, the sport will itself resonate with people and will garner more admirers.

He also added that the Indian Hockey Team is confident of qualifying for the 2020 Tokyo Olympics.

Our Sports Minister has always supported us. The honours lie upon us to win medals for the country," Singh told ANI.

As the 2020 Tokyo Olympics are fast approaching, Singh said that the first task for the side will be to qualify for the sporting event. The 24-year-old added that he's confident of qualifying for the Olympics and affirmed that if the team is through, they will strive to win gold.

"We are working very hard, the first thing we need to do is to qualify for the Olympics. For qualifying, we need to put our best foot forward and then we will aim to win the gold medal," Singh said.

"Our first task is to qualify for the Olympics, I am confident we will qualify and after qualification, we will think about the Tokyo Olympics. I hope we will continue to remain consistent, our aim will always be to win a medal for the country," he added.

Hockey India on July 25 had announced an 18-member squad for the Olympic Test event in Japan.

The team management had decided to rest senior players such as captain Manpreet Singh, PR Sreejesh and Surender Kumar.

The Indian team chief coach Graham Reid had said that the break will help the players shake off any niggling injuries and refresh themselves ahead of the Olympic qualifying matches in November.

Singh agreed with the head coach's statement, saying the rest was much needed for senior players. He also showed faith in the youngsters, stating that the new players will put their best foot forward.

"All the new players that have come into our side, they are all good. Some senior players needed rest, and they have been given rest by the federation. Some players were playing at a stretch from a long time so the rest was much needed.

New players are really good, they have been given an opportunity in the Olympic Test Event and I am confident they will perform to the best of their ability," Singh said.

Singh, who made his foray into international hockey in 2013, said that his game is improving day by day. According to him, his main task is to create penalty corners and convert them into goals.

Singh had scored his first goal against Oman in 2013, and the player has established his place in the side, becoming the linchpin in the current hockey team.

"I think my game is improving day by day. My main role is to create penalty corners and convert them into goals. I went into a dull period in the middle, but I was able to come back in to form and right now all things have fallen into place," Singh said.

Former Indian hockey team skipper Dhanraj Pillay had earlier emphasised on the betterment of rural setup to find and nurture players in the sporting circle.

"If more players are to be found and nurtured in the sporting circle, rural setup needs to be improved. No doubt, players from big cities get opportunities faster. But the rural setup has always given us great players.
Players hailing from small towns make the most out of the given opportunity. I truly believe our hockey team will qualify for Tokyo 2020 Olympics," Pillay had told ANI.

Singh agreed with the former Olympian, and hoped to see more players from rural India come under the limelight in future."I agree with Dhanraj sir. Hockey is getting support from all around the corners, the rural setup has improved quite a lot and I hope it continues to get better to give more players to the country," Singh said.

Pillay had also urged the team to not to concede goals in the dying minutes of the match. Singh said that the team has been practicing quite hard to get better in this aspect.

"We are practicing quite hard to eradicate this problem. Conceding last-minute goals has been a problem, but our support staff is working closely with us and our coach has always told us to give 100% in the last five minutes of the match," Singh said.

"We scored goals in the dying minutes in our last tournament, we are working really hard at this aspect and our coaching staff is helping us improve," he added.

The Indian team would next be participating in the Olympic Test event which is slated to begin from August 17 in Japan.