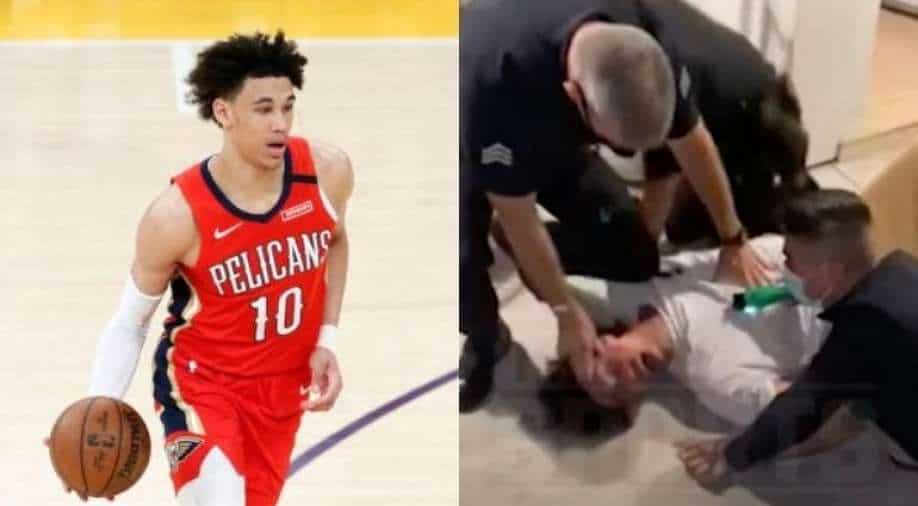 The 21-year-old basketball player was arrested for resisting arrest. However, minor injuries on him were evaluated by a hospital.

A video was released on Friday in which a police officer in Los Angeles was seen pressing his knee to the neck of NBA player Jaxson Hayes as he was being arrested. In the video, the New Orleans Pelicans centre gasped "I can't breathe" before being tased by another officer.

According to the officers, they went to Hayes' home in the Woodland Hills neighborhood on July 28 around 3 a.m. after his girlfriend's cousin called 911. The cousin said Hayes' girlfriend was sending her text messages saying he had become loud and violent and she was scared.

"The LAPD conducts very thorough 'use of force' investigations which typically requires the police officers to interview multiple witnesses and analyse significant amount of forensic evidence. We are still at an early stage of investigation, which can often take upto a year to complete," said Captain Stacy Spell, commanding officer of the media relations division of LAPD, in a video released by the department.

The 21-year-old basketball player was arrested for resisting arrest. However, minor injuries on him were evaluated by a hospital.

The incident comes a year after the infamous killing of George Floyd. On May 25, 2020, George Floyd was murdered by a police officer in Minneapolis, when Derek Chauvin pressed his knee against his neck for up to 9 and a half minutes over suspicion of a counterfeit $20 bill. The streets of U.S. cities filled with protesters demanding an end to police killings, in the largest mass movement for civil rights in a generation.

Chauvin was later convicted of second-degree unintentional murder, third-degree murder and second-degree manslaughter and was expelled from the police force and sentenced to 22 and a half years in jail.

However, similar scenes were witnessed during Jaxson Hayes' arrest. The 15-minute long video showed how the NBA player was gasping for breath and kept saying "I can't breathe". In the video, Hayes' arms and shirt showed specks of blood.