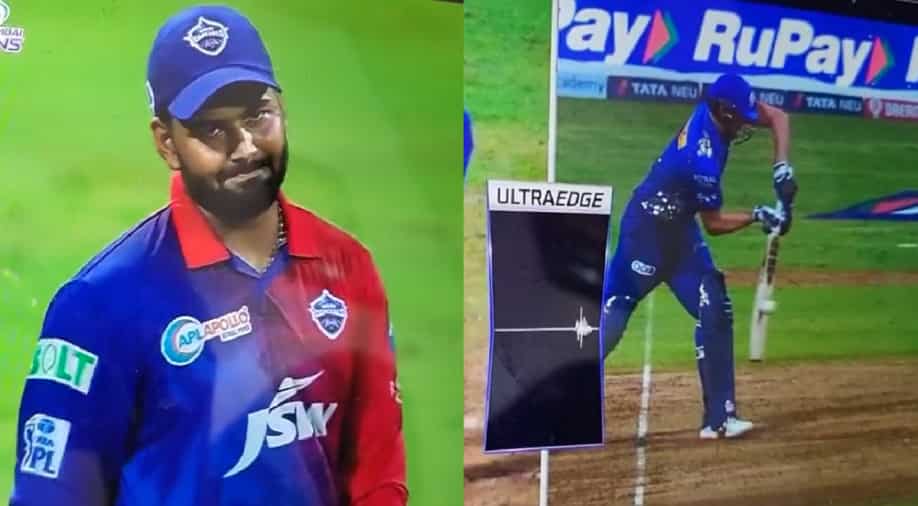 Delhi Capitals skipper Rishabh Pant's huge DRS blunder cost his side their must-win clash against Mumbai Indians in IPL 2022 on Saturday (May 21). Pant didn't go for a review after MI batter Tim David edged one to him off Shardul Thakur's bowling.

Delhi Capitals (DC) skipper Rishabh Pant made a huge DRS blunder during his side's must-win clash against Mumbai Indians in the IPL 2022 on Sunday (May 22). The DRS error from Pant potentially cost his side the game as they were knocked out of the race for the playoffs after getting thrashed by five wickets at the hand of Mumbai Indians (MI) at the Wankhede Stadium in Mumbai.

Batting first, Delhi Capitals rode on crucial knocks from skipper Pant (39) and Rovman Powell (43) to post a fighting total of 159 runs on the board in 20 overs. In reply, Mumbai Indians found themselves reeling at 95/3 inside 15 overs at one stage before Tim David's sensational cameo saw them cross the line comfortably and end the season with a win.

David slammed a brilliant 34 off just 11 balls laced with 4 sixes and 2 fours. However, the Australian all-rounder could have been sent packing early in the 15th over itself when he edged a delivery from Shardul Thakur which was caught by Pant behind the stumps. However, the DC skipper didn't go for a review after the on-field umpire ruled David not out.

Delhi Capitals had a review remaining in their kitty but Pant decided not to use it. Replays later showed there was a clear edge off David's bat before the ball flew into Pant's gloves. David's wicket could have potentially taken the game away from MI and put DC in a solid position but Pant's error ended up costing them the game.

Tim David was out but Pant didn't review. pic.twitter.com/e0hI6DpMRR

Pant's error in judgement was one of the turning points of the game as David had not even gotten off the mark when he was caught by the DC skipper. His dismissal could have paved the way for a DC victory. David went on to score 34 off just 11 balls as MI won the game by five wickets.

While DC failed to make it to the playoffs, RCB have finished in the top four for the third time in a row this season. The Faf du Plessis-led side will be hoping to make the most of their qualification and go the distance this year as they chase their maiden IPL trophy.