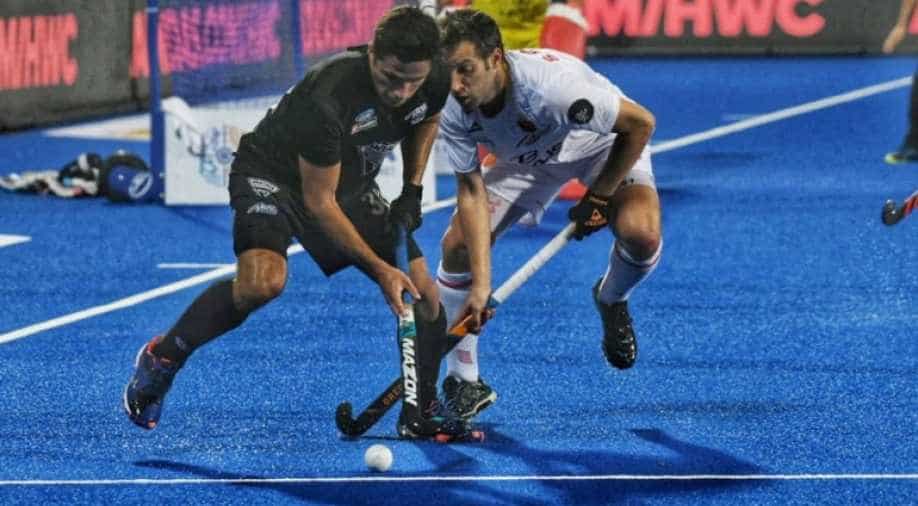 Players of NZ and Spain in action during the 3rd round of Pool A game. Photograph:( Twitter )

By the virtue of this draw, the Kiwis have qualified for the knock-out stages of the men’s hockey World Cup.

New Zealand fought back from two goals down to hold Spain to a 2-2 draw in their penultimate Pool A match. By the virtue of this draw, the Kiwis have qualified for the knock-out stages of the men’s hockey World Cup.

Spain scored two field goals in the opening two quarters through Albert Beltran (9th minute) and Alvaro Iglesias (27th) to go into the half time with a comfortable 2-0 lead.

But the Black Sticks made a stupendous comeback in the final 10 minutes of the game and scored through Hayden Phillips (50th) and Kane Russell (56th) to upset the World no 8.

In the encounter, it was the Black Sticks who had the first shy at the goal in the sixth minute but Hugo Inglis strike from close range was saved by Spain captain and goalkeeper Quico Cortes.

Meanwhile, Olympic champions Argentina are at top of Pool A with six points from two wins. Despite losing to France by a margin of two goals, Argentina continues to top Pool A.