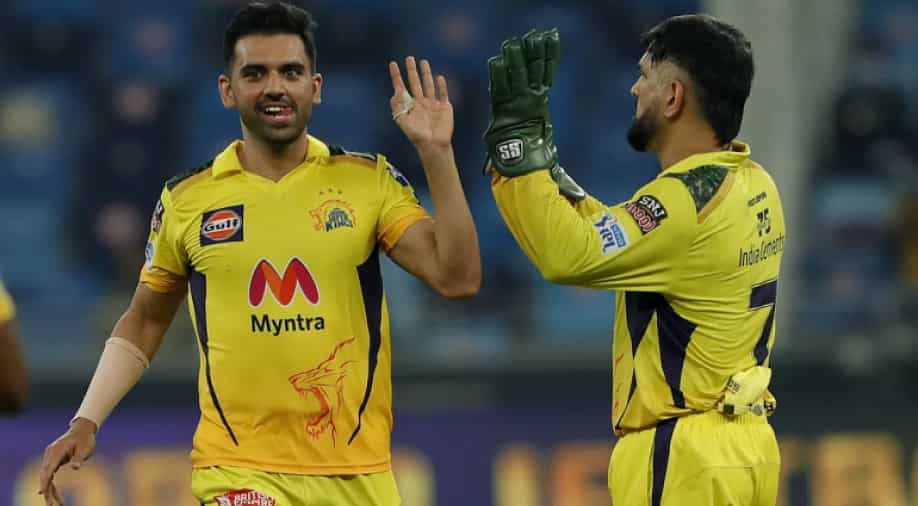 Irfan Pathan has picked a CSK youngster who can replace Deepak Chahar. | Photo - IPL | Photograph:( Others )

Former India all-rounder Irfan Pathan has picked an ideal replacement for injured pacer Deepak Chahar at CSK ahead of the start of IPL 2022.

Chennai Super Kings (CSK) have been handed a huge blow ahead of the start of the Indian Premier League (IPL) 2022 as there remain doubts over the fitness of Indian pacer Deepak Chahar. Chahar was CSK's most expensive pick at the mega auction last month as the five-time champions pent a whopping Rs 14 crore (INR 140 million) to ensure he was back with the Yellow Army.

However, Chahar is likely to miss the first couple of weeks of action for CSK in IPL 2022 due to an injury. He is yet to join CSK's ongoing training camp in Surat and there is no update on his progress. However, CSK are hopeful that the pacer can recover fully soon and join the rest of the squad for the upcoming season.

With Chahar likely to miss the first couple of weeks of action, former India all-rounder Irfan Pathan has picked a talented youngster who he feels can be an ideal replacement for the pacer in CSK's playing XI. Pathan hailed India U-19 star Rajvardhan Hangargekar as a fantastic talent and backed him to take Chahar's spot in the playing XI in the pacer's absence.

Also Read: From Jasprit Bumrah to Kagiso Rabada: A look at five players who might win Purple Cap in IPL 2022

“Shardul Thakur isn't there as well so you need to make sure that you find a replacement. They have one guy who is young, is raw - Hangargekar. You know he is a fantastic young talent. If a young guy comes into other team I might be a bit more worried but they have MS Dhoni as their leader, their captain behind the stumps and that makes things a lot easier for the younger guys. So I feel they nearly found some sort of replacement,” Pathan said on Star Sports.

Hangargekar is a promising all-rounder, who can bowl at a good pace and is also a hard-hitting batter down the order. The youngster has already started training with his CSK teammates and is currently being mentored by captain Dhoni in the team's preparatory camp ahead of the new season.

While Pathan insisted it is not easy to replace someone like Chahar in the XI as the pacer is known for his exploits in the powerplay and can move the ball both ways to provide early breakthroughs to his side, he backed Hangargekar to have a breakthrough season with CSK.

“Obviously for Deepak Chahar, it is not easy to find the kind of bowler because the skills he brings to the table like swinging the ball around and getting early wickets. As soon as he gets fit he comes into the playing XI but till then they need to rely on Hangargekar. I think he will be the guy who will actually come with a lot of potential,” Pathan said.