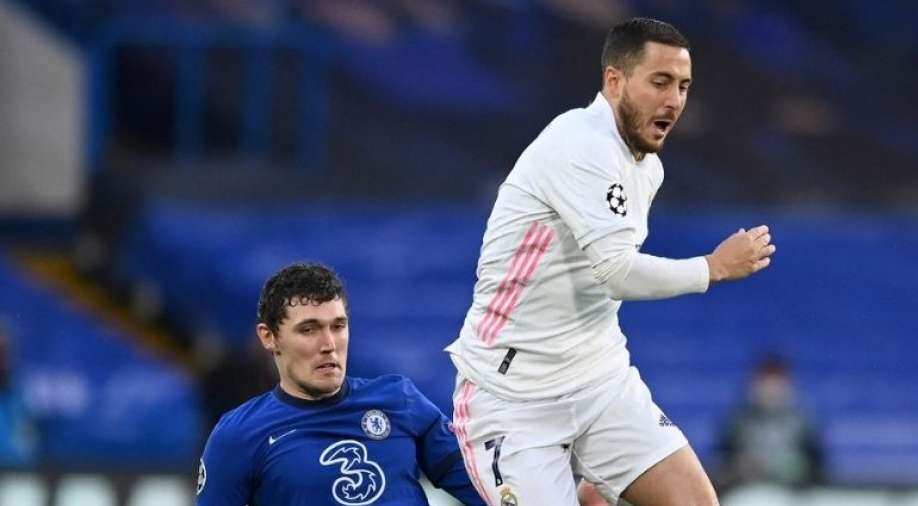 Several fans took to social media and criticised the Belgian player for his performance and final whistle reaction against Chelsea.

Real Madrid were knocked out of the UEFA Champions League after a 2-0 (aggregate 3-1) defeat to Chelsea in the second leg of their semi-final tie in the Champions League. However, what further infuriated Madrid fans was Real Madrid winger and former Blues Eden Hazard's reaction after the final whistle.

Several fans took to social media and criticised the Belgian player for his performance and final whistle reaction against Chelsea. As per Marca, Real Madrid were furious after seeing Eden Hazard laughing and smiling at full time as he greeted some of his former teammates.

Eden Hazard couldn't help but be happy for his former club 🔵

Eden Hazard, who left Chelsea to be a part of Real Madrid in a deal worth £100 million, is having a tough time with the Spanish club as he was ruled out for a lengthy period of time due to a knee injury. Hazard has failed to find some form in his game due to which several RM fans expressed their anger towards the player and urging them to sell him.

Eden Hazard just got knocked out of the Champions League and this is his reaction after the game. This man doesn’t care 😂 pic.twitter.com/bzLtcf14GH

Eden Hazard in the chelsea lockeroom after full time 🥂 pic.twitter.com/a6ToV7osTn

Two players that doesn't deserve to be at my club! #HazardOut pic.twitter.com/eQLW7jawBD

It's a shame that this player wears the Ronaldo, Raul Juanito jersey#hazardout pic.twitter.com/vsYknYJrEF

In Return, He's Laughing with his friends after UCL Elimination in Semi-Final.

At least Show some RESPECT for the badge You Wear on your chest. #HazardOut pic.twitter.com/j04eEBuwJS

Zinedine Zidane defended Hazard after putting a poor show against the Blues and said: "Eden has to get his confidence back and he needs to keep playing. Little by little, we have to make sure he recovers."

The coach also admitted record signing Hazard had been off the pace during the game but said the only way for the Belgian finally to thrive after two seasons with Real riddled with injuries was to keep playing.

"We were playing a semi-final and every player was ready, they wouldn't have played if they were not," Zidane told reporters.

"We can all be proud of the players, we gave it our best shot and we got here, to within one step of the final. Chelsea put in a great performance and you have to congratulate them."