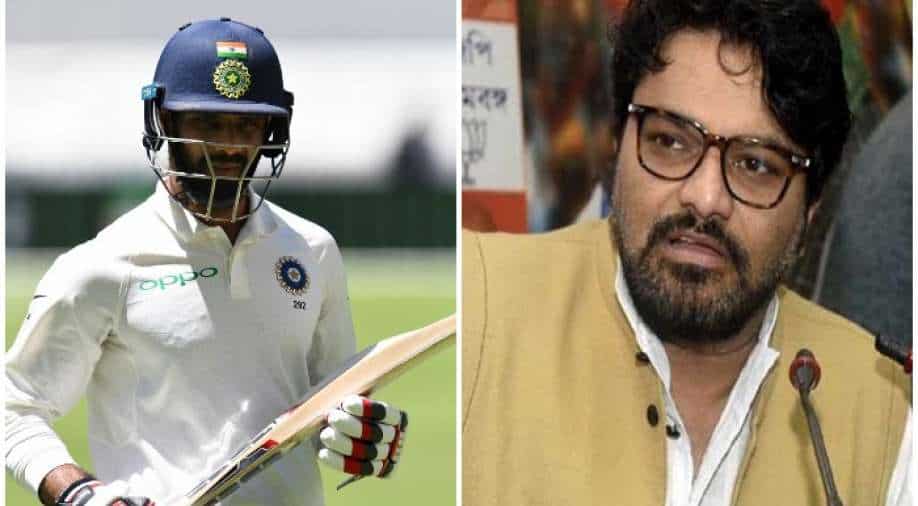 Indian cricketer Hanuma Vihari on Wednesday shut down Member of Parliament Babul Supriyo after an absurd tweet by the playback singer. Supriyo, after India’s drawn Test in Sydney, had blamed Vihari for not sealing India’s win and forcing it for a draw after a slow knock. Importantly, Supriyo even misspelt Vihari’s name as ‘Hanuma Bihari’ which infuriated the fans further.

Indian cricketer Hanuma Vihari on Wednesday shut down Member of Parliament Babul Supriyo after an absurd tweet by the playback singer. Supriyo, after India’s drawn Test in Sydney, had blamed Vihari for not sealing India’s win and forcing it for a draw after a slow knock. Importantly, Supriyo even misspelt Vihari’s name as ‘Hanuma Bihari’ which infuriated the fans further.

After the Sydney Test when the entire world was hailing the efforts of Vihari and Ashwin, Babul Supriyo’s tweet took the fans by shock.

While Supriyo was central to major criticism by the fans, Hanuma Vihari on Wednesday took to Twitter to shut Supriyo with an impactful reply. Vihari’s reply went viral in a jiffy as fans lauded the Indian batsman and the hero of Sydney Test for shutting Supriyo.

“Playing 109 balls to score 7 !That is atrocious to say the least•Hanuma Bihari has not only killed any Chance for India to achieve a historic win but has also murdered Cricket.. not keeping win an option, even if remotely, is criminal. PS: I know that I know nothing abt cricket,” Supriyo had tweeted after the drawn Sydney Test.

To which the Indian batsman replied to simply correct the spelling of his name: "*Hanuma Vihari".

Another hero of Sydney Test, Ravichandran Ashwin also posted a screenshot of the conversation and enjoyed the cracking reply by the Indian batsman.

ALSO READ: Bruised and broken but Sydney was 'conquered'

Fans enjoyed Vihari's response as most of them said it was the greatest reply of the new year.

The Indian cricket team, in the third Test against Australia in Sydney, achieved what has been hailed as one of the greatest draws in the history of Test cricket. With an injury-ravaged squad, the Indian team batted for 131 overs to save the Sydney Test. While the likes of Cheteshwar Pujara and Rishabh Pant started the great escape, Hanuma Vihari and Ravichandran Ashwin were the orchestrators for the visitors.

Vihari, who suffered a grade 2 tear in his hamstring, batted for around 3 hours and helped India save the Sydney Test from an almost impossible situation. To his plight, Vihari was even unable to walk properly when he was stitching the heroic partnership with Ashwin.

Even Ashwin had a back spasm and was even unable to tie his shoelaces or even sit properly during Day 5 of the Sydney Test. But the duo, despite being hit several times on their body by the world-class Australian bowling attack, continued to bat for the sake of their country and team.

Due to Ashwin and Vihari’s enormous effort, India drew the Sydney Test and kept the series alive at 1-1.

India and Australia will now lock horns in the fourth and final Test, scheduled to start from January 15, at The Gabba in Brisbane.