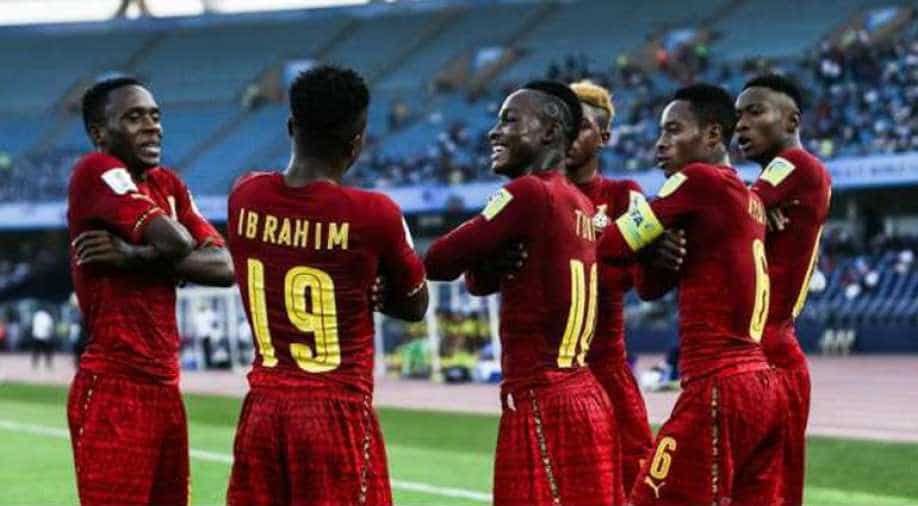 Two-time champions Ghana began their FIFA U-17 World Cup campaign with a 1-0 victory over Colombia in a Group A match here today.

Sadiq Ibrahim scored the all-important goal as Ghana ran away with three full points in the tournament opener at the Jawaharlal Nehru Stadium.

The match did not rise to any great heights with not many attempts at the goal with few good moves coming from both sides.

It was end-to-end stuff with Colombia slightly dominating initially before Ghana stamped their authority as the match went on.

Ghana, who finished runners-up in the African qualifying tournament, soaked the initial pressure from the Colombians and then slowly began to dictate terms on their South American opponents. They had won the tournament in 1991 and 1995.

Colombia were doing most of the attacking in the first half and had more possession. They initiated their attacks mostly from the left side of the pitch. Left winger Brayan Gomez had a couple of shots at the Ghana goal but could not test goalkeeper Danlad Ibrahim properly.

It was Ghana who drew the first blood in the 39th minute with Ibrahim connecting a fine cross from the left by captain Eric Ayiah.

It was a defensive sloppiness on the part of the Colombians and their captain and center back Thomas Gutierrez allowed the low cross to go past him across the face of the goal for Ibrahim to fire home with a low shot.

Colombia coach Orlando Restrepo replaced an ineffective Brayan Gomez by Deiber Caicedo at the half time but his side s fortunes did not change much.

Colombia put more men upfront in search of an equaliser, but Ghana were able to stitch some dangerous moves at the counter.

Ghana captain Eric himself had a fine try at the Colombia goal in the 73rd minute but goalie Kevin Mier came out of his line in the nick of time to have a last touch and negated the move.

Three minutes later, Aminu Mohammed had a shot from the left edge of the Colombia box but his effort aiming at the near post was blocked by the golie.

Second half substitute Caicedo had Colombia's best chance of the match in the 80th minute as he was sent free at the edge of the Ghana box but his low right-footed grounder beat the goalkeeper but went out inches off the left upright.

There were a few scrambles at the Ghana goal-mouth towards the end of the match but Colombia could not find the eqauliser.