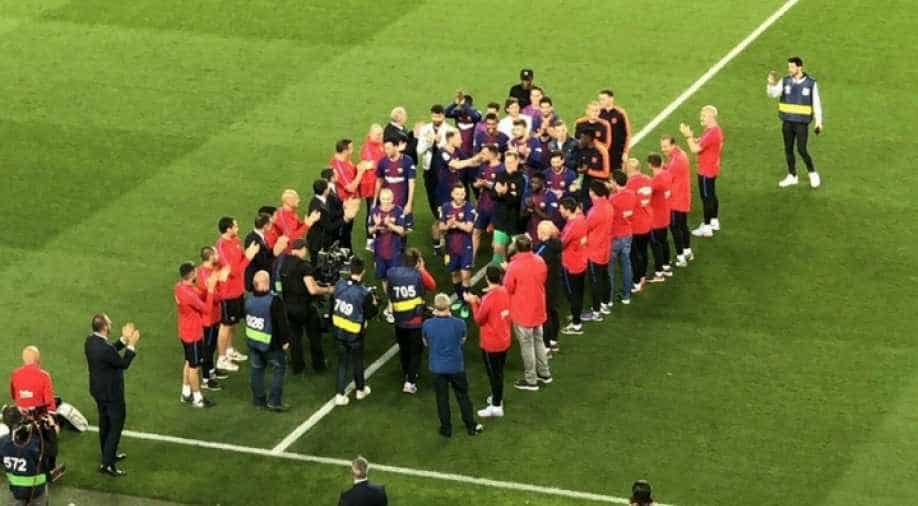 Real Madrid refused to give a guard of honour in the El Clasico to the league champions FC Barcelona on Sunday but Barca defender Gerard Pique asked the club staff to perform the tradition.

Recently, Madrid's coach Zinedine Zidane mentioned very clearly that Real Madrid will not give La Liga champions Barcelona a guard of honour when the sides meet in El Clasico.

While interacting with media, Barcelona defender Gerard Pique said, "As we are a family, and they didn't want to give us a guard of honour, I have asked our staff to make one, with that we are leaving."

We did our own guard of honour since madrid refuse to give us. The coaching staff perform a
guard of honor for the team #ForçaBarça! pic.twitter.com/6ZZEZdVhNY

In a very intriguing clash, Luis Suarez and Lionel Messi scored at the 10th and 52nd minute respectively to help Barca in continuing its winning streak.

Real Madrid forward Gareth Bale lashed home to deny La Liga champions Barcelona victory in an ill-tempered 'Clasico' which finished 2-2 at the Nou Camp on Sunday (May 6) after the home side had Sergi Roberto sent off at the end of the first half.