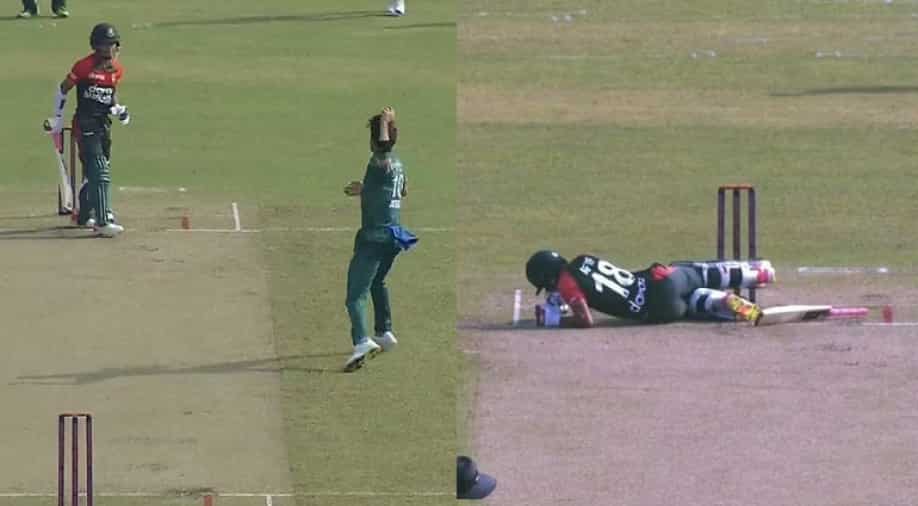 Pakistan pacer Shaheen Afridi injured Bangladesh batter Afif Hossain with a dangerous throw in frustration on his follow-through after being hit for a six.

Pakistan made it two wins in a row against Bangladesh on Saturday as they defeated the hosts by eight wickets to clinch the three-match series 2-0. Pakistan bowlers once again produced an excellent performance to restrict Bangladesh on a low-key total of 108 runs and chased down the target comfortably with eleven balls to spare to win the game.

There were not many heated moments between the players of the two sides in the second T20I on Saturday but one particular incident caught the eyes of many. Pakistan pacer Shaheen Shah Afridi hit Bangladesh batter Afif Hossain with a dangerous throw on the follow-through after being hit for a six on the previous delivery.

The incident happened in the third over of Bangladesh's innings when Hossain defended a delivery and the ball went straight to Afridi. The speedster collected the ball and there it back towards the stumps only for it to hit Afif dangerously as the batter went down on the ground instantly.

Watch the video of the incident here:

Gets hit for a 6 and Shaheen Shah loses his control next ball! #PAKvsBAN #ShaheenAfridi pic.twitter.com/phpRLBFRMm

The incident didn't go down well with many fans on Twitter, who slammed the Pakistani fast bowler for his actions. Afif scored 20 runs before getting dismissed in the 9th over by Shadab Khan. Shadab and Shaheen were both impressive with the ball for Pakistan as they picked up two wickets apiece to restrict Bangladesh on a paltry 108.

In reply, Pakistan once again got off to a stuttering start as they lost skipper Babar Azam (1) cheaply in the third over of the run-chase. However, Mohammad Rizwan's 39 and Fakhar Zaman's unbeaten 57 helped Pakistan chase down the target with ease and register a comfortable victory by 8 wickets.

With the win, Pakistan have clinched the three-match series and will be aiming to register a clean sweep when they lock horns with Bangladesh in the third and final T20I on Monday (November 22).