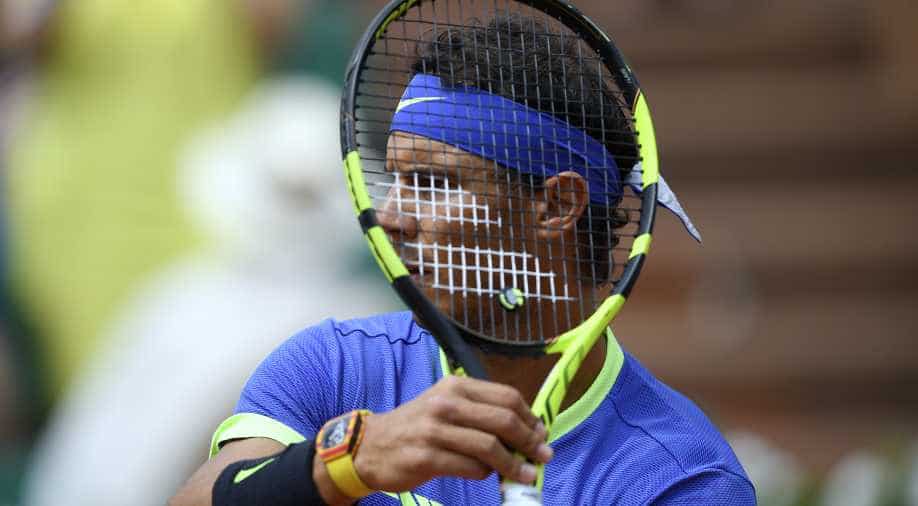 Rafael Nadal sets up for a shot during his first round encounter against Frenchman Benoit Paire. Photograph:( AFP )

Nadal, who was forced to withdraw before last year's third round with a wrist injury, brushed aside 45th-ranked Benoit Paire 6-1, 6-4, 6-1 inside two hours.

"I'm very happy to be back here after what happened last year. It's great to feel the support," said the 14-time major champion.

Nadal broke Frenchman Paire eight times and recovered from a slight second-set wobble when he dropped serve twice in a row to surge into a round two meeting with Dutchman Robin Haase.

"It's always at the start, happy for the victory. Was not an easy opponent in the first round, obviously. He's an uncomfortable opponent that already he had some good victories this year," added Nadal.

Title-holder Djokovic strolled through his opener against Marcel Granollers of Spain, advancing 6-3, 6-4, 6-2.

With 1999 French Open champion Agassi in the players box for the first time after agreeing a short-term coaching role, Djokovic experienced some trouble against the world number 77, being broken four times.

"It's great to have Andre Agassi as coach and as a mentor. I will try to learn as much as I can from him," said Djokovic.

The Serb, seeking to become the first man in the Open era to win all four majors on at least two occasions, will take on Portugal's Joao Sousa next.

"Coming to this tournament for first time as a defending champion gave me, probably more than anything else, relief, because the anticipation and the pressure and expectations that I had also for myself but all the other people around me in the last three, four, five years before 2016 Roland Garros trophy was really big," added Djokovic.

The fourth seed will meet Estonia's Anett Kontaveit for a place in round three as Schiavone, who turns 37 in June, bid farewell to the tournament for possibly the final time.

"I cannot believe in the first round we have two ex-champions. Not only that but Francesca is a legend and I was very excited to play on Philippe Chatrier court with her," said Muguruza.

"I know I played good here before. That doesn't make me extra confident this year. I think I just have to earn that confidence here, and, like today, going out there, trying to deal with things. That's what brings me confidence. Not remembering how I played last year."

Muguruza defeated Serena Williams to win her maiden Grand Slam a year ago, but the 23-year-old needs to return to the final to stay in the world's top 10.

Second seed Karolina Pliskova won for just the third time in six visits to Roland Garros with a 7-5, 6-2 victory over China's Zheng Saisai.

Canadian fifth seed Milos Raonic raced through with a routine 6-3, 6-4, 6-2 victory over Steve Darcis of Belgium.

The 20-year-old Zverev defeated Djokovic in Rome a week ago to become the first player born in the 1990s to land a Masters title.