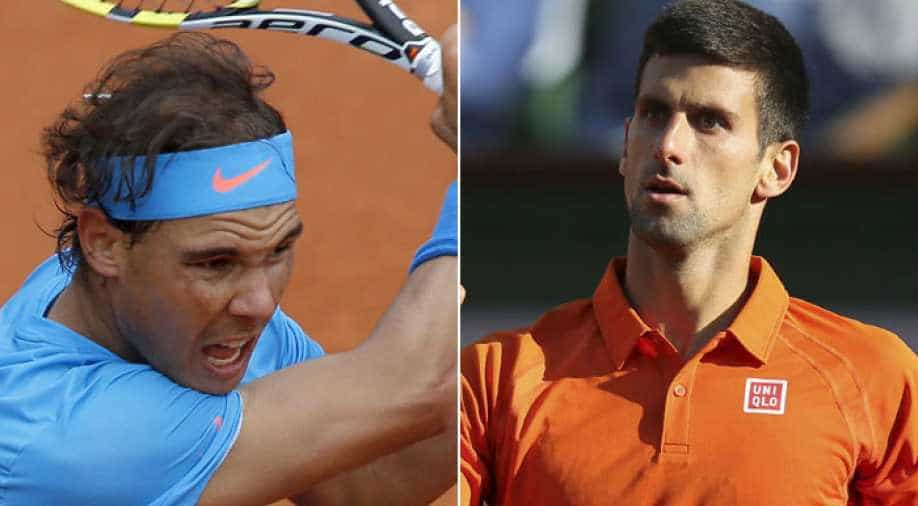 Old rivals Novak Djokovic and Rafael Nadal are slated to face-off in the semi-finals of the French Open. Photograph:( Zee News Network )

Djokovic led 3-2 at the time and when battle resumed he suffered a nasty fall, grazing his hand, but sensed his chance when Berrettini served at 5-6.

A fired-up Novak Djokovic repelled a stirring fightback by Italian Matteo Berrettini to claim a 6-3 6-2 6-7(5) 7-5 victory on Wednesday to set up a mouth-watering semi-final showdown with defending champion Rafa Nadal.

The 34-year-old bellowed a series of frightening roars after completing a victory that at one stage looked like a formality but became increasingly fraught as Berrettini threw the kitchen sink at the Serb who becomes only the second man to reach 40 Grand Slam semi-finals after Roger Federer.

It was a spectacular conclusion to a match that was watched by 5,000 fans until midway through the fourth set when Paris's COVID-19 curfew meant the crowd were obliged to leave.

Djokovic led 3-2 at the time and when battle resumed he suffered a nasty fall, grazing his hand, but sensed his chance when Berrettini served at 5-6.

The Italian ninth seed, saved a couple of match points, the second with a sizzling forehand winner, after which Djokovic screamed angrily at his entourage and kicked an advertising board in disgust.

He got the job done at the third time of asking when Berrettini netted at the end of another high-octane baseline exchange. Djokovic, eyes bulging, then roared again towards his box, the sound echoing around an empty Court Philippe Chatrier.

It was a manic ending and showed exactly how much Djokovic wants a second French Open title, having claimed his first in 2016 to complete his career Slam.

Since then Nadal has been unbeatable on the Parisian dirt, extending his record total to 13 titles and counting, the last coming last October when he thrashed Djokovic in the final.

Djokovic said booking another clash with Nadal had not been behind his extraordinary reaction at the end.

"This match had it all: falls, crowd, break," he told reporters. "It was a lot of intensity. I just felt under tension the entire time and missed some chances to end it in three.

"It was just super, super stressful to constantly be under pressure... the reaction in the end was just me liberating that tension that was building up for the entire match."

Top seed Djokovic was given a mighty scare against Italian teenager Lorenzo Musetti on Monday, losing the first two sets, before steamrolling to victory.

It was much more straightforward, initially, against Berrettini as he broke for a 3-1 lead in the first set.

Berrettini was playing well but he failed to convert a break point when trailing 4-2 and after that the match was one-way traffic as Djokovic served up a clinical masterclass.

But Berrettini dug his heels in throughout the third set even though he could not fashion a break point.

With the tournament's first night-session crowd getting behind the 25-year-old, Berrettini extended Djokovic into a tiebreak and then upped the power, bombing down a couple of aces and some venomous forehands.

Djokovic had the match on his racket at 5-4, however, but a couple of uncharacteristic errors gave Berrettini a set point that he converted with another thudding forehand.

Energised, Berrettini looked increasingly dangerous but the drama was halted as the fans departed -- one defiantly staying put until forced to leave his seat.

After a 25-minute delay, in which the players left the court, games went with serve although it was far from comfortable for Djokovic who went flying face down into the dirt after being wrong-footed.

He dusted himself down and finished the job but the 18-time Grand Slam champion knew he had been in a tough battle and will need to find an even higher level when he locks horns with Nadal for the 58th time in their compelling career rivalry on Friday.