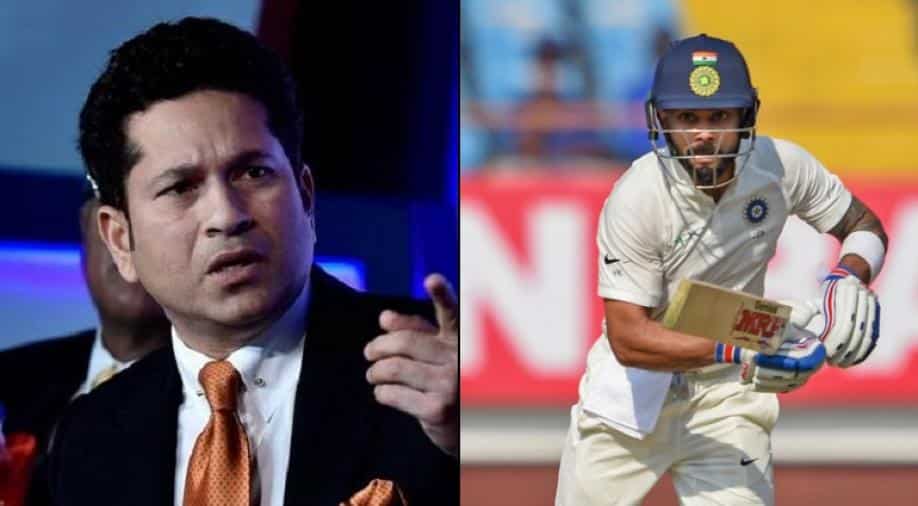 Virat scored a total of 139 runs and his knock included 10 fours.

India's former cricketer Sachin Tendulkar, who owns the world record of 100 centuries, 51 in Test and 49 in ODIs, hailed Virat Kohli's 24th Test century against West Indies saying, scoring a century in every outing is 'a great habit to have'.

After Kohli's ton on day two of the first Test against West Indies in Rajkot on Friday, Sachin, took to Twitter to congratulate the skipper. Virat scored a total of 139 runs and his knock included 10 fours.

Sachin wrote, "Another outing, another century! A great habit to have. Keep it up."

There has been a constant comparison made between Virat and legendary Sachin Tendulkar and it is expected that Virat will definitely break all the existing records and will create new ones.

Once Gavaskar said, "Records are meant to be broken. While we know that some of Tendulkar's records are well nigh impossible to be able to get like 200 Test matches, nor anybody can reach 51 Test hundreds," Gavaskar said.

"But the manner in which Virat is batting, the record for (Tendulkar's) 49 hundreds looks possible."

Another outing, another century! A great habit to have. Keep it up... 👍 pic.twitter.com/ohQ50sZ3dU

Kohli became the quickest batsman to reach 24 Test centuries after the great Donald Bradman. He reached his 24th century in his 123rd innings, while Australia's Bradman took just 66 knocks to achieve the same feat.

He also surpassed Australia's Steve Smith to go second in the list of centurions among active players, behind South Africa's Hashim Amla on 28.