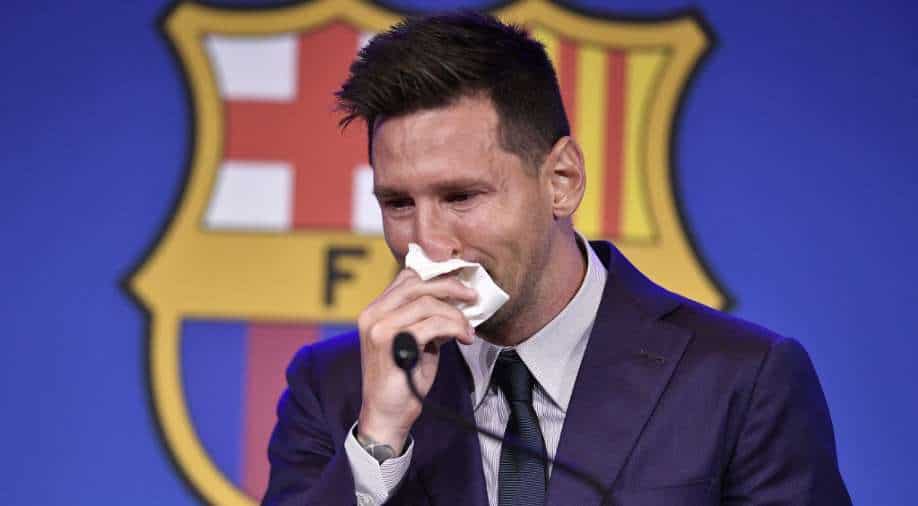 Messi was in tears at the beginning of Sunday's press conference, during which he was energetically applauded by teammates and reporters.

Argentinian football ace Lionel Messi has opened up on his shocking exit from Barcelona and stated that a move for Paris club PSG is a "possibility". Messi was in tears at the beginning of Sunday's press conference, during which he was energetically applauded by teammates and reporters.

He started by confirming that he is leaving Barcelona, where he spent his entire professional career.

Lionel Messi turned into a free agent upon the termination of his last agreement at Barcelona in June, and the club affirmed on Friday that they have not been able to secure him to another arrangement because of monetary and structural deterrents.

The Blaugrana couldn't re-sign the 34-year-old without surpassing La Liga's compensation limit, which means the six-time Ballon d'Or victor will currently be compelled to track down another club, and he concedes that the entire circumstance has come as an extraordinary shock to him.

"I gave everything for this club from the first day I arrived to the last. I never imagined having to say goodbye as I didn't think about it. What's clear is I did everything possible, and they couldn't do it because of La Liga.

"A lot of things have been said about me, but on my behalf, we did everything I could because I wanted to stay. Last year I didn't want to stay and I said it. This year I did and I couldn't.

ALSO READ: Olympics 2020: Tokyo Games in the shadow of the pandemic

The Argentine was likewise inquired as to whether reports of Paris Saint-Germain being his most probable next objective are valid, to which he reacted: “Paris Saint-Germain is a possibility, yes. At the moment nothing is confirmed, I received a lot of calls after the Barcelona statement. We’re talking about it."

“The picture with Paris Saint-Germain was a coincidence, completely. I met them in Ibiza, we got together one day, we are friends. He called me and said I'm in Ibiza, we'll get together and there was a joke at the time, come to Paris. But it was a joke,” he added.

Cash-rich Paris Saint-Germain is one of the few clubs able to afford the Barcelona legend. A move to Paris would reunite him with his close friend Neymar Jr. with whom he played at Barcelona.

The 34-year-old, who has been at the club for 21 years, becoming its all-time goalscorer with 682, broke down in tears before giving a speech and was greeted by a lengthy standing ovation from the media, current and former team mates and coaches in attendance.