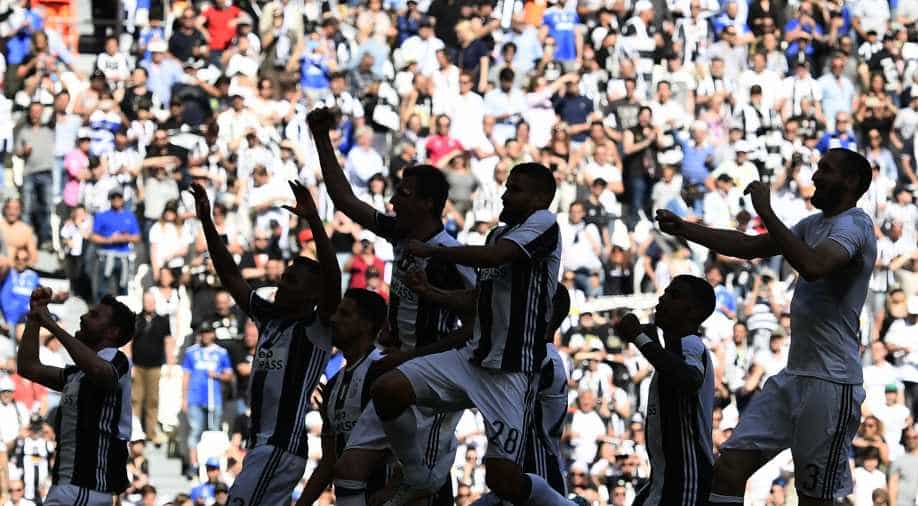 The win means they have an unassailable fpour-point lead over second-placed AS Roma.

Massimiliano Allegri's men took a one-point lead over Roma into their penultimate game of the league campaign and needed a win to secure the title.

Mandzukic gave the hosts a 12th minute lead when he met Juan Cuadrado's cross at the back post to fire past Alex Cordaz in the visitors' net.

Croatia international Mandzukic, celebrating his 31st birthday, almost gave Juve a 2-0 lead before Fabio Sampirisi toe-poked the ball away from the big forward as he teed up.

But the fans who packed out Juve's stadium for their final home game of the campaign were not to be denied.

Dybala doubled the Turin giants' lead with a sumptuous free kick that curled into the top corner to leave Cordaz with no chance six minutes before half-time.

And their third consecutive league and Cup double, also a record, was al but sealed seven minutes before full time when Cordaz palmed Sandro's bullet header in off the underside of the crossbar, goal-line technology confirming it had crossed the line.

Juventus will now turn their focus to winning an unprecedented club treble when they face 11-time champions Real Madrid in the Champions League June 3 final in Cardiff.

These are the five keys to Juventus's title success this season:

Juventus's path to a record sixth consecutive 'scudetto', and a possible treble of trophies, has been a steady work in progress but the Turin club's recruitment policy, particularly last summer, was key. Although coach Massimiliano Allegri picked his targets, most of the credit will go to general director Beppe Marotta, who thanks to some shrewd negotiating added quality to the squad -- and at a cut-price cost. Snapping up Paul Pogba on a free transfer from Manchester United in 2012 and then selling the emerging French star back to the Premier League giants for 105m euros, an all-time record, last summer helped balance the books. It helped cushion the blow of paying 90m euros, an Italian record, to Napoli for the southerners' 36-goal hero Gonzalo Higuain, whose 24 goals before their final game at Bologna was among the league's best. Following Andre Pirlo's departure in 2015, Juventus snapped up Bosnian free-kick specialist and midfielder Miralem Pjanic from Roma, in the process denting the capital club's title hopes. The cherry on the cake was the addition of former Barcelona right-back Dani Alves, who arrived on a free transfer and has since proved pivotal to their success in Italy as well as their ongoing campaign in Europe.

Under Allegri, who in 2011 helped AC Milan end a seven-year wait for the scudetto, Juventus have become one of the most potent, well-rounded teams in Europe only four years after former coach Antonio Conte dismissed their chances of ever challenging for continental honours. Allegri's nose for tactics, and how to motivate his players has been crucial. After three years of playing a 3-5-2 formation under Conte, and failing to reach the Champions League final, Allegri has reached two in just three years, having opted earlier this season for a 4-2-3-1 that, with considerable focus on individual defensive duties as well as a potent attack, has won plaudits throughout the game. Thanks to evergreen goalkeeper Gianluigi Buffon and a rock-solid back four bossed by Giorgio Chiellini and Leonardo Bonucci, Juve have conceded only 26 league goals so far. Pjanic overcame a mercurial start to the season to hit some crucial free-kicks for the champions, while Juve's attack -- a three-man front line of Mario Mandzukic, Paulo Dybala and Juan Cuadrado -- all supporting lone striker Higuain -- has scored a combined total of 43 goals.

At the start of the campaign Allegri had a problem: making sure Higuain, freshly arrived from Napoli with a new 36-league goal Serie A record in his pocket, didn't go goal-hungry. To whet Higuain's appetite but also keep the Argentina striker within the realms of his tactical plan, Allegri reshuffled, and after a few teething problems found the magic formula. Allegri convinced Mario Mandzukic to take a role out wide on the left, a switch that, despite a comparative lack of goals, brought the best out of the Croatian striker who has won extra plaudits for some dogged defensive displays. Argentina starlet Paulo Dybala slipped into his preferred role just behind Higuain, allowing the diminutive playmaker free reign on the edge of the area to dazzle opposition defences, score goals and provide crosses into the danger zone. Colombian Juan Cuadrado was at home out wide on the right, where his pace and creativity are regular problems for opposition defences. With such support, Higuain could hardly complain. Although he remains four goals behind Serie A's leading scorer Edin Dzeko, who has hit 28, Higuain has fulfilled his wish of winning trophies in Italy.

Once known for the ultra-defensive 'catenaccio' system, designed primarily to stop opposing teams from scoring, Italian teams have since woken up to the fact that attacking play is crucial to success if they are to keep pace in Europe. But one of the keys to Juve's success this season was Allegri's insistence on every player performing defensive duties. Most, even Higuain -- who received flak in the past for being overweight and shirking when it came to tracking back -- was receptive to the idea. Two years after losing the Champions League final 3-1 to Barcelona, Allegri dangled the carrot of another promising European campaign in front of the players. And to a man, the Bianconeri responded, upping their defensive game by chasing lost possession and tracking back to cut down opposition teams' chances.

Juventus wouldn't be in their current position without long-serving goalkeeper Gianluigi Buffon, who at 39 years old remains the bedrock, and captain of the Turin giants as they head towards a possible treble, and he heads towards an expected retirement following an eventual Italy campaign at the 2018 World Cup in Russia. The Champions League title remains the only major accolade missing from the 2006 World Cup winner's list of honours, but Buffon has kept his eye on the ball no matter the opposition. Two years after being nominated for the UEFA save of the season award, when he stopped Dani Alves in the 2015 Champions League final, Buffon defied the onset of age to maintain spectacular form, earning his place on the 30-man shortlist for the Ballon D'Or, placing ninth in the final voting alongside Real Madrid centre-back Pepe. Last January Buffon was awarded the Serie A goalkeeper of the award for an 11th time.

'Never overstay your welcome': Ravi Shastri set to step down as head coach of the Indian cricket team