EXPLAINED! Here's how India can qualify for CWC 2022 semi-finals after big win vs Bangladesh 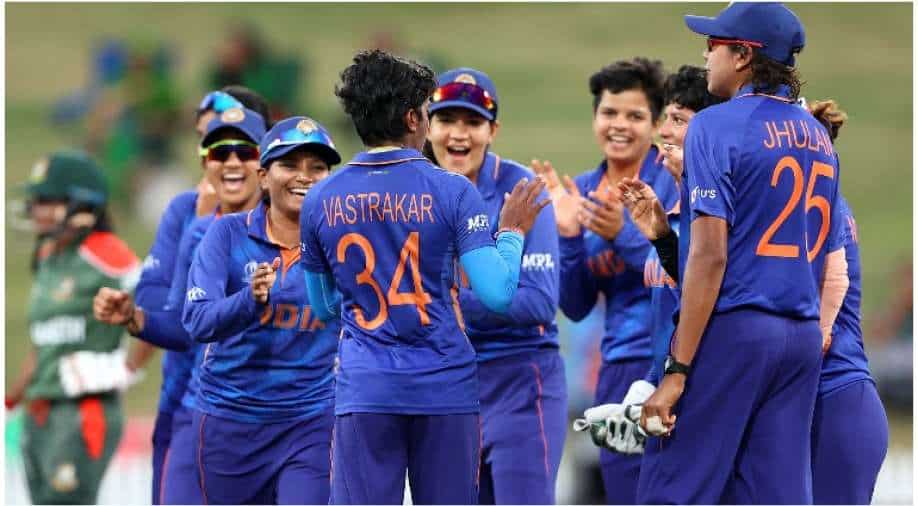 EXPLAINED! Here's how Mithali & Co. can make it to CWC'22 semis Photograph:( Twitter )

Mithali Raj-led India are back to winning ways and remain in contention to make it to the CWC'22 semi-finals. Here's how the two-time runners-up can qualify for the knockouts:

Mithali Raj-led India returned back to winning ways in the ongoing ICC Women's World Cup, in New Zealand, with an NRR-boosting win over minnows Bangladesh on Tuesday (March 22). After back-to-back defeats versus England and Australia, respectively, India faced the Bangla Tigers and finished the game with a massive 110-run win at Seddon Park, Hamilton.

Talking about the encounter, India opted to bat first and rode on a good start by openers Shafali Verma and Smriti Mandhana. After the end of the 74-run opening stand, the innings progressed ahead with Yastika Bhatia's 50 and vital knocks from the likes of Pooja Vastrakar, Sneh Rana and wicketkeeper-batter Richa Ghosh as India posted 229/7 on a tricky surface.

Despite Ritu Moni's three scalps and skipper Mithali's golden duck, India had a good total to defend versus the inexperienced line-up. Sneh's four-fer and contributions from other bowlers helped India maintain the pressure as the Bangladeshi line-up folded for a paltry 119 in 40.3 overs to concede an easy win for the Indian team.

How can India make it to the semi-finals?

Post the big win over Bangladesh, India have bolstered their chances of making it to the top-four. They have been helped with some recent results, with South Africa losing to Australia and West Indies going down to Pakistan, and now need to only ensure a win in their last league stage match to progress ahead. For the unversed, India can also make it to the semis despite a loss versus South Africa, on March 26 (Saturday), on NRR but will have to fight it out versus other contenders, such as West Indies (one game remaining) and England (with two matches left).

At present, both West Indies and defending champions England are in contention with 6 and 4 points, respectively. Thus, India will have an eye on the two teams' respective remaining games as well.

After the Bangladesh win, captain Mithali said at the post-match presentation, "It was important to get partnerships as it wasn't a surface where a new batter could get going instantly. We did well to get to 230 after losing those early wickets. Having all-rounders definitely gives the cushion of batting deep and it's good in a tournament like this. You want bowling options and also someone down the order to contribute with the bat. Selectors have also been on the same page in bringing more all-rounders. For a long time, we've always banked on our spinners and we have quality spinners. Today's surface did help them a lot too. Wouldn't say we are spin-dominant, it also depends on the opposition we're playing. We haven't played a game in Christchurch yet, so that's a challenge. It's an important game for India and we would want to do well in all departments."