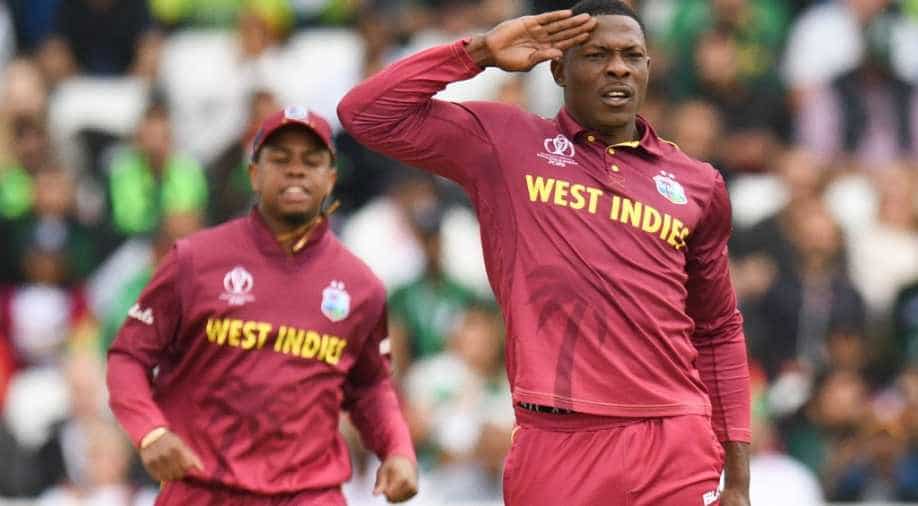 Exclusive - Will take a knee in CPL and IPL, if required: Sheldon Cottrell Photograph:( AFP )

West Indies fast bowler Sheldon Cottrell, who was also a soldier for Jamaican Defence Force for over a decade, in an exclusive interview with WION, said that if required, he will take a knee in the upcoming Caribbean Premier League (CPL) and Indian Premier League (IPL) 2020.

The Black Lives Matter (BLM) Movement took the entire world by storm following the death of African-American man George Floyd, under police custody, in Minneapolis on May 25. While there were worldwide protests, superstars from the sports world took a step forward and joined the movement.

While the likes of Lewis Hamilton, Coco Gauff, Israel Adesanya among many others taking to the streets to voice their anguish against racism, other players and teams took a knee before the start of matches in Premier League, Bundesliga and other top leagues.

In cricket world, the England-West Indies Test series, which was the first international series after the COVID-19 break, set a benchmark as players, umpires and coaching staff took a knee before the commencement of all three Test matches. Sportspersons, who are an inspiration for millions, started to take a leading role in Black Lives Matter Movement.

South Africa, a country which has suffered from racism for long, also took a stand for Black Lives Matter Movement, as players, officials and coaching staff took a knee before the start of their 3TC event, which was held in Centurion, and sent a strong message to the entire world on how severe the issue of racism is.

West Indies fast bowler Sheldon Cottrell, who was also a soldier for Jamaican Defence Force for over a decade, in an exclusive interview with WION, said that if required, he will take a knee in the upcoming Caribbean Premier League (CPL) and Indian Premier League (IPL) 2020.

Cottrell is set to play for St. Kitts and Nevis Patriots in CPL 2020 and will make a much-awaited debut in IPL 2020 for Kings XI Punjab, who signed him up for a whopping Rs 8.5 crore in the auction.

While Cottrell said that he has never experienced racism before, he knows the issue is for real and is completely against any form of discrimination.

“I have never experienced racism before. But I know it is for real and totally against it (racism) in any ways or form. We are all human beings and only thing I know to show is love. I don’t care where you are from. I don’t care what’s your skin colour. Only thing I know is loving others. I have grown to understand that some people are different but you don’t need to treat them different,” Cottrell who was the highest wicket-taker for the Windies in ICC World Cup 2019 told WION in an exclusive interview.

When asked whether he would take a knee in CPL 2020 or IPL 2020, the Windies pacer said if required, he will take a knee and won’t oppose to it as he is with the movement while citing examples of Colin Kaepernick and others who have done it on the field.

“About the knee, if required, I will, to be honest (take a knee). I won’t oppose because I am with the movement and for the movement. For once, you have the platform, where you can exercise your beliefs, there’s nothing wrong with it. I think that’s the best stage. Kaepernick did it. A lot of people after him did it. And it is something I don’t have a problem with,” Cottrell said.

Cottrell has been pick of the bowler for the West Indies in the limited-overs circuit as the left-arm pacer picked up 49 wickets in 35 ODIs. Whereas in T20Is, he has 36 scalps in 27 matches.