EXCLUSIVE | He's been playing by his own rules: Tsitsipas opines on Novak Djokovic's Aus Open saga 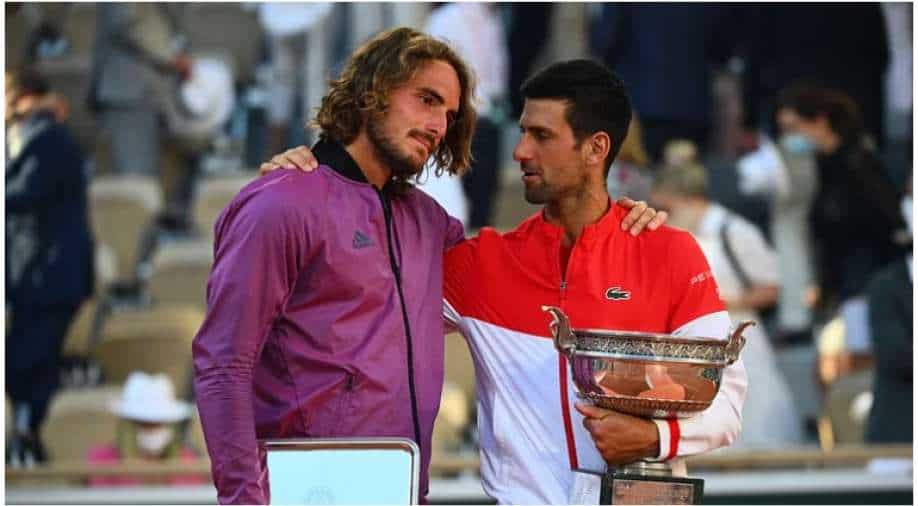 Before the Australian Open gets underway, WION's Sports Editor Digvijay Singh Deo interacted with Greek player Stefanos Tsitsipas on his journey so far, recovering from a painful elbow surgery, Djokovic's global controversy, learnings from French Open 2021 final loss and on the Big Four.

The action in the world of tennis is set to begin with the first Grand Slam of the year, i.e. the Australian Open, to commence on January 17 (Monday). Ahead of the marquee tournament, there has been a lot of noise outside the court courtesy world number one Novak Djokovic's Aus Open saga.

Before the action starts on the court, WION's Sports Editor Digvijay Singh Deo interacted with Greek player Stefanos Tsitsipas on his journey so far, recovering from a painful elbow surgery, Djokovic's global controversy, learnings from French Open 2021 final loss and on the Big Four.

On recovery from elbow surgery

Tsitsipas underwent a right elbow surgery after struggling with the injury for long. As a result, he pulled out of his opening match in Paris Masters and went down to Andrey Rublev in his first group clash to bow out of ATP Finals, during mid-November 2021. He labelled his recovery as a difficult phase 'physically and mentally'.

"I was four weeks away from tennis, didn't touch the racket. I think I can play now with no pain. The recovery has been very good. Even my doctor said that my recovery has been faster than it should've, which is great news for me. When things like this happens, it is very difficult physically and mentally. But I'm very grateful to have found the right people, right doctor....It is a big mental relief knowing that I won't have to struggle that much now again," he revealed.

"There's been a lot of talk about it since the past four-five weeks. People are constantly talking about it and it is the No. 1 topic these days, with no talks about tennis (smiles). When you are one of the best tennis players in the world, there's going to be a lot of interest and demand around you. How I see it is that everyone has the freedom to choose and decide for themselves. If one sees it as not respecting the human race, it is upto anyone really. End of the day, your body is a very important machine. You have to protect it. You will feel not as safe as others (of getting vaccinated), then you should proceed accordingly," Tsitsipas opined.

On Wednesday (January 11), the Serbian superstar Djokovic had admitted to breaching Covid rules, by going ahead with an interview with a Serbian journalist despite a Covid positive test. In addition, he shifted the blame on his agent for filing his travel form incorrectly after entering Australia for the first-ever Grand Slam of 2022.

Given the tennis stars are role models for the younger generations, does Tsitsipas feel Djokovic set a wrong example by breaching Covid rules?

The 23-year-old Tsitsipas made an honest assessment and said, "For sure, he's been playing by his own rules. He's been doing something which not many tennis players have the guts to do especially after ATP announced certain criteria for players to enter the country. Not many would've thought to come to Australia unvaccinated or not following the protocols. It takes a lot of daring to it and putting a Grand Slam at risk. I chose to go and be 100 percent ready for whatever was to come and not having thinking about anything else. Doesn't mean my way is the right one and his way is the wrong one. Each one has a different perception."

Given that many have varied opinions when it comes to Djokovic's Aus Open saga, Tsitsipas shared what the tennis community feels and revealed, "Two ways to look about it. Every single player, almost, the stats say that 98% of the players are fully vaccinated and have followed the rules. One side of it is that we have been very disciplined. On the other hand, a very small majority have followed a different path and aren't playing by the rules; making the majority look like fools (chuckles)."

On French Open loss to Djokovic

Tsitsipas, the world No. 4 in ATP Men's rankings, also reflected back on his French Open final loss to Djokovic last year. During the epic finale, the Greek player was leading the Serbian by two sets before the latter shocked the entire tennis fraternity with his aggressive style of play to win 6–7, 2–6, 6–3, 6–2, 6–4.

On his disheartening loss, he told, "It taught me a lot. It taught me to not defend too much. Staying back...not attacking enough.... overthinking...that can cost you (the game). That has been the case after being two sets up. I kind of felt I backed down a little bit. But I also feel he raised his game a lot during the final. After the break, he refreshed himself and I saw a different Novak on court."

Are the likes of Tsitsipas, Daniil Medvedev, Alexander Zverev, etc. ready to take over from the Big Four?

Even someone with basic knowledge of tennis is aware of Big Four's dominance -- Roger Federer, Rafael Nadal, Djokovic and Andy Murray -- since early 2000s. Nonetheless, the present younger batch comprises some promising talents in the form of Daniil Medvedev, Alexander Zverev -- both of whom have won a Grand Slam -- Tsitsipas and more.

Thus, Tsitsipas reacted on the transition phase and said the next lot is ready to take over.

"It is around the corner. With the big four not playing a lot when it comes to participation in Grand Slam, we all are competing well and have been very close. Daniil has been redeemed for his efforts with his first title (US Open in 2021). I see all of us competing for these titles a lot in the coming years. We are surrounded by a lot of young and talented players who have the ability to lift Grand Slam trophies and win in big stages," he signed off.