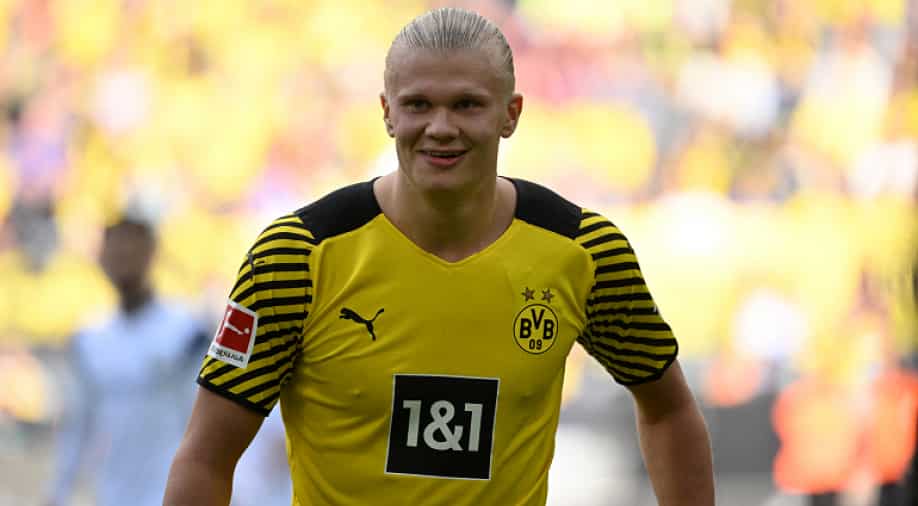 Manchester City are set to sign Norweigan striker Erling Haaland, who is one of the most sought after footballers in the world at present. The deal is reportedly set to be completed this week.

Manchester City are reportedly set to announce the blockbuster transfer of Norwegian striker Erling Haaland this week. The reigning Premier League champions are currently locked in a close battle with Liverpool to win their second title on the trot and have already started planning for the upcoming season by strengthening their squad.

Haaland, who has been absolutely sensational for Dortmund ever since joining the Bundesliga club from Red Bull Salzburg in 2020, is one of the most sought-after footballers in the world at present and a number of top teams are interested in securing his services. However, Man City have reportedly won the race to sign the 21-year-old.

As per a report in The Athletic, Haaland's move to Manchester City is a 'done deal' and can be announced as early as this week. Multiple reports in Germany have also confirmed the Dortmund striker's imminent departure to Man City. Haaland has decided to walk in the footsteps of his father Alf Inge Haaland, who also played for Man City during his playing days.

Also Read: 'We know how much Man Utd means to him' - David Beckham hopes Cristiano Ronaldo stays on

Dortmund had inserted a release clause of around 73 million Euros in Haaland's contract when he had signed for the German club. The release clause is set to get activated this year and Man City have agreed to pay the fee for the Norwegian goal machine, who was on the radar of several big clubs including the likes of Manchester United, Real Madrid and Barcelona.

As per reports, Haaland will sign a five-year contract at Man City and is set to become one of the highest-earning players in the league with a staggering salary of 500,000 pounds a week at Man City. His arrival is going to significantly boost City's squad strength and will make them a force to reckon with in Europe.

Pep Guardiola, who has failed to win the Champions League with Man City despite enjoying tremendous success in the league, will be looking forward to conquering Europe next season with Haaland in his side. Haaland has scored a brilliant 85 goals in 88 matches for Dortmund and is all set for his next challenge in the Premier League.