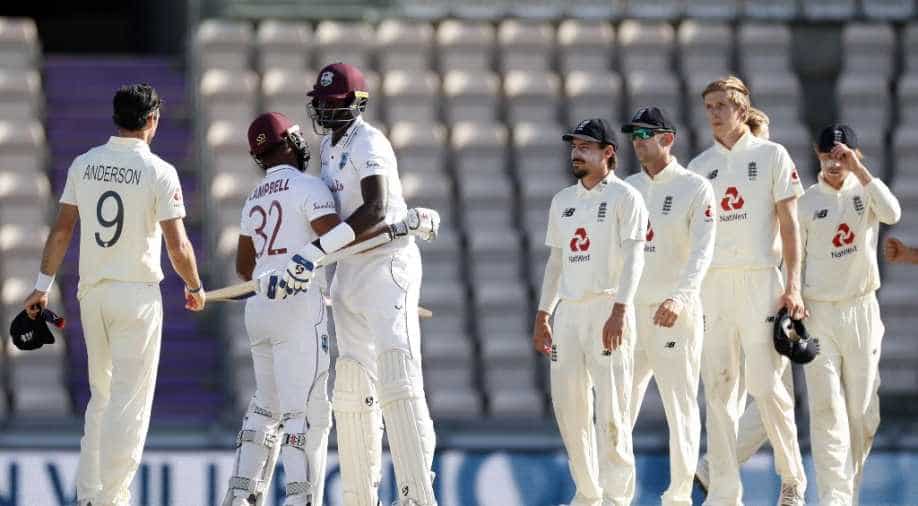 The West Indies defeated England by 4 wickets at the Ageas Bowl in Southampton as the visitors took a 1-0 lead in the three-match Test series.

International cricket returned with a bang! Test cricket returned with its nerve-wracking sessions and battle between the willow and the red cherry. Before the first Test between England and the West Indies commenced at the Ageas Bowl in Southampton, there were whispers how it would pan out. Will players be fully up for it, will not playing cricket for 117 days take a toll on the players? And every question was thrown out of the window as both England and West Indies produced cricket of the highest quality upon the return of international cricket.

The West Indies led by the ever-dependable Jason Holder clinched a fairly comfortable four-wicket win in Southampton while taking a 1-0 lead in the series. While the word comfortable may sound like a cake-walk, it wasn’t the case at all. The game felt like a pendulum as the dong moved to and fro between the two sides with each passing session. 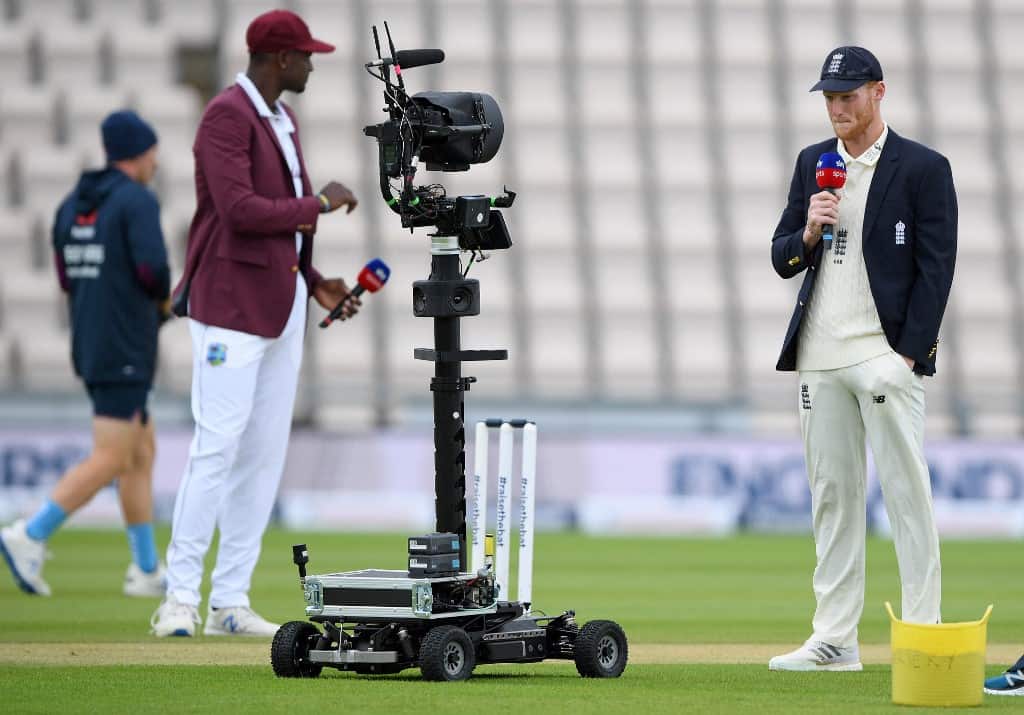 Day 1 started with a game of hide and seek with the rain gods as the world witnessed little action on the first day. After a delayed start, England’s Test skipper for the match, Ben Stokes opted to bat first under overseas condition, on a pitch which certainly had some sort of moisture due to persistent rain in the build-up to the match. The move to bat first raised a few eyebrows. 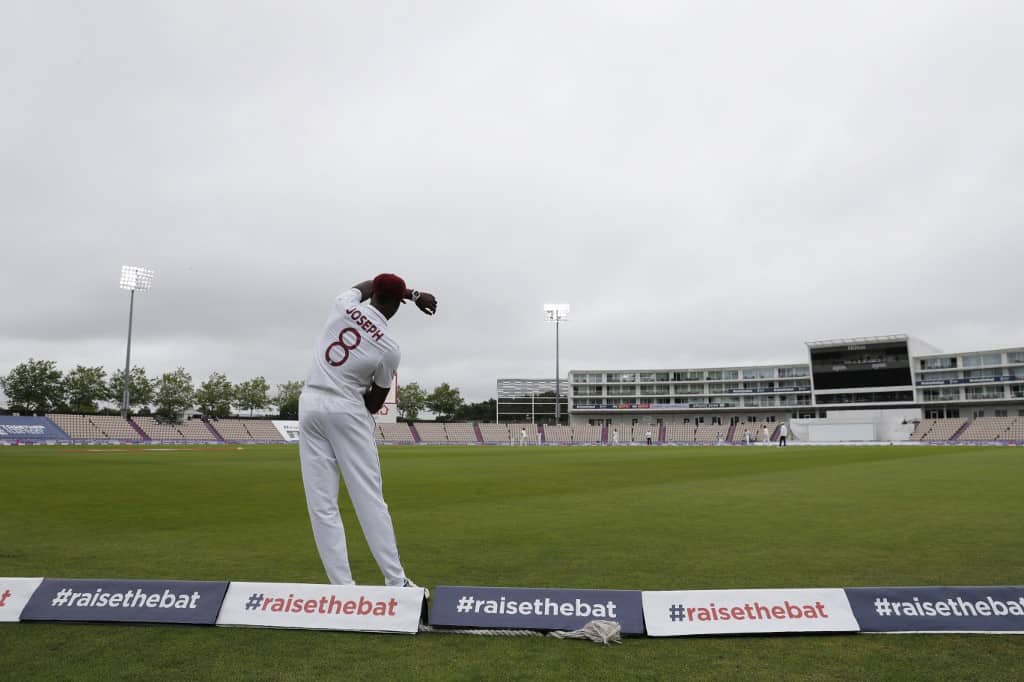 The red ball, on which saliva can’t be used due to the ban imposed by the ICC to curb the spread of coronavirus, was handed over to Kemar Roach and Shannon Gabriel. But before the first ball of the match was bowled, all the players and staff took a knee in support for the Black Lives Matter movement. Ten balls into the game, Dom Sibley’s stumps were dislodged by a peach by Gabriel. The ball moved a bit but to some extent, it was a rusty judgement by the English opener. Rory Burns and Joe Denly took charge in the middle and saw off a splendid spell of bowling by Roach and Gabriel. 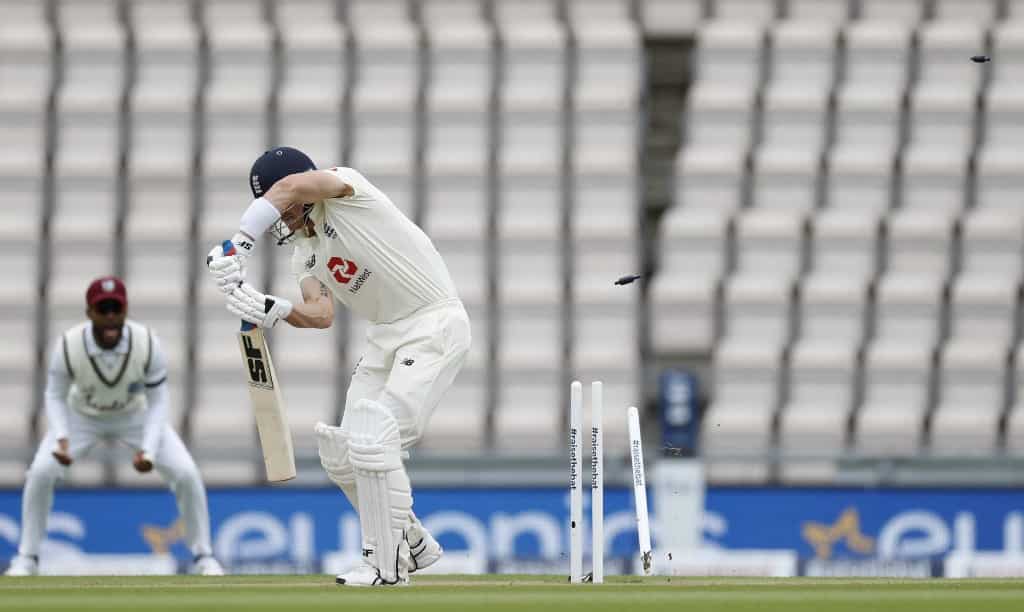 Following the initial spell by Gabriel and Roach, it was time for ‘Captain West Indies’ to stand up and produce what he has been doing for the last few years. Even though Holder is not someone who would terrorise batsmen with his pace, he showed what damage testing line and length can do. Holder made the ball talk and there were three edges straight to the keeper Shane Dowrich as Ben Stokes (43), Ollie Pope (12) and Jos Buttler (35) were sent packing by the number one all-rounder in Test cricket.

Dom Bess kept the scoreboard ticking with a handy 31 not-out but the Holder and Gabriel were too hot to handle for the English lower-order as the hosts were bundled out for 204. Holder with six, Gabriel with four, shared all the wickets among themselves. 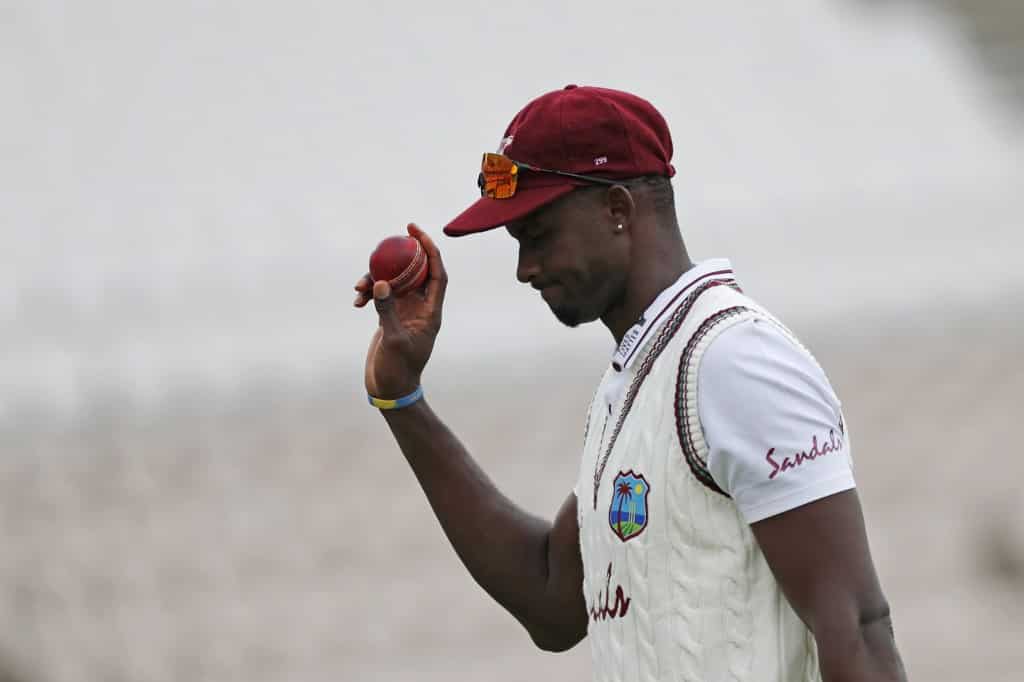 For the West Indies, openers Kraigg Brathwaite and John Campbell saw off the initial spell by James Anderson and Jofra Archer before taking the field on a bright sunny day on Day 3. A superb 65 by Brathwaite laid the platform for the visitors despite Campbell (28) and Shai Hope (16) departing without scoring much. Shamarh Brooks (39) showed glimpses of his highly-rated talent but it was Roston Chase’s 47 off 142 which built the road for the West Indies win. Dowrich with his gritty 61 threw some confidence and a lead of over 100 runs.

It was a lacklustre performance by the English bowlers in the first innings. While Jimmy Anderson looked like a lone warrior, swinging the ball away or even bringing it back with a break of the wrist, Jofra Archer and Mark Wood with speeds of over 90 mph looked like a mere shadow of themselves. Their barrage of bouncers was firmly dealt by before Stokes took it upon himself to do the damage. The end result? Four wickets for the number two ranked Test all-rounder in the world. Credit to Dom Bess, who toiled hard in his 19 overs to pick up two crucial wickets of Hope and Blackwood. The West Indies ended up posting 318 runs on the board. With the sun out and a relatively drier and flatter track, Rory Burns and Dom Sibley stitched a 72-run opening stand before the former was sent packing Roston Chase, visitors’ only spin option. Sibley went on to score a half-century before falling prey to Gabriel. Joe Denly and Zak Crawley tried putting a partnership but the former was again subjected to a soft dismissal, falling for his own mishaps, again and again. 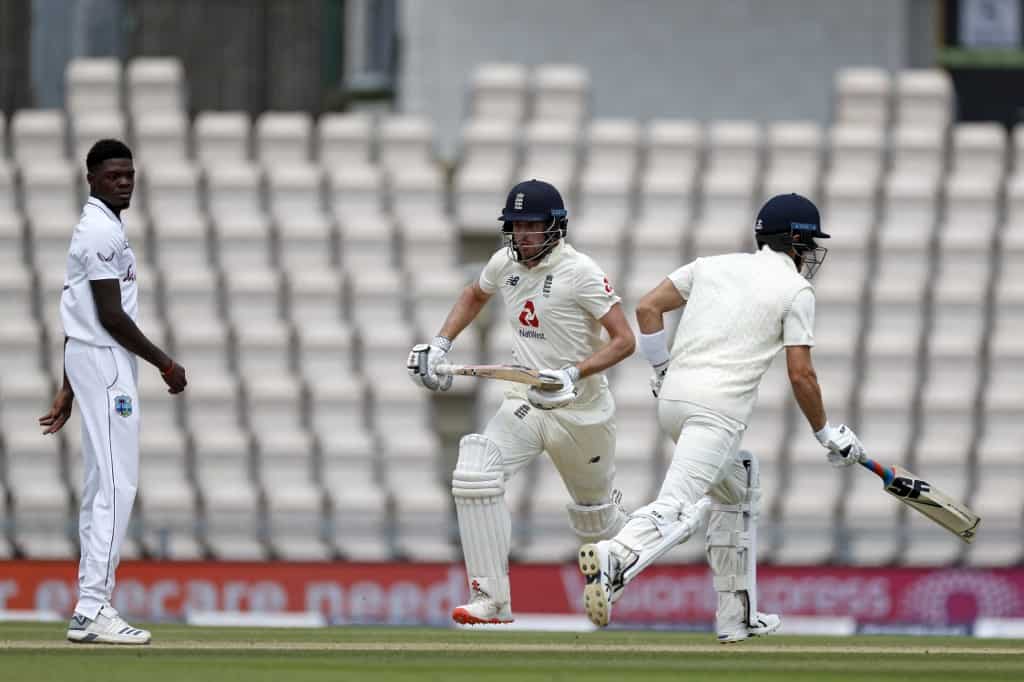 Stokes came up with a counter-attacking mood and scored a quick-fire 46 off 79 but Alzarri Joseph, after going wicket-less in the first innings, found the bullseye by dismissing Stokes and Crawley. Gabriel came back to life again and wreaked havoc while sending the lower and lower-middle order back to pavilion. Another impressive performance by the veteran and a fifer to his name. England were bundled out for 313 as the West Indies were given a target of 200 runs. 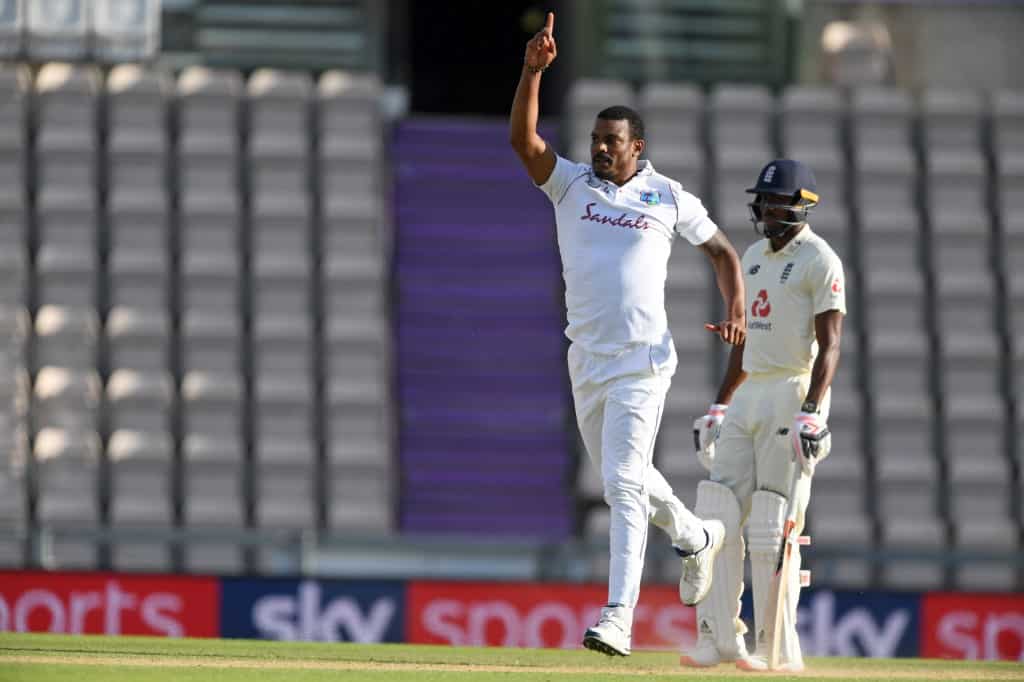 There was scrutiny towards Jofra Archer for being lazy in the first innings and many could sense he would come alive in the second innings, and that is what exactly happened. John Campbell was retired-hurt and Brathwaite was walking back to the hut in no time after the West Indies started their chase. 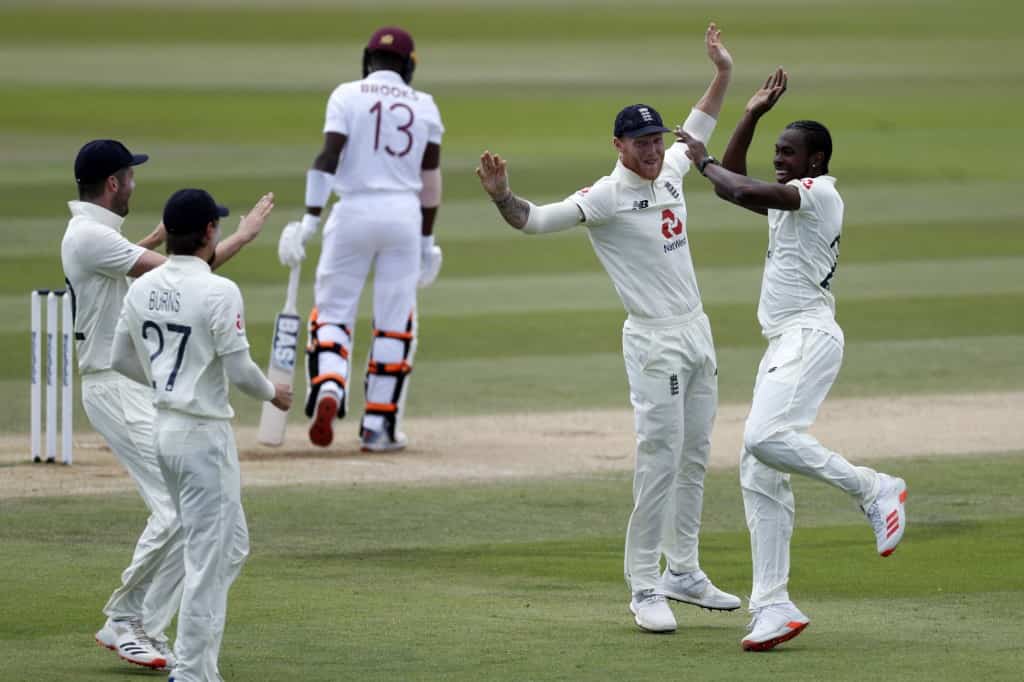 Mark Wood too clocked up his intensity and got rid of Shai Hope as the visitors saw them reeling at 27-3. Brooks again fall victim to Archer’s class and bagged a five-ball duck. 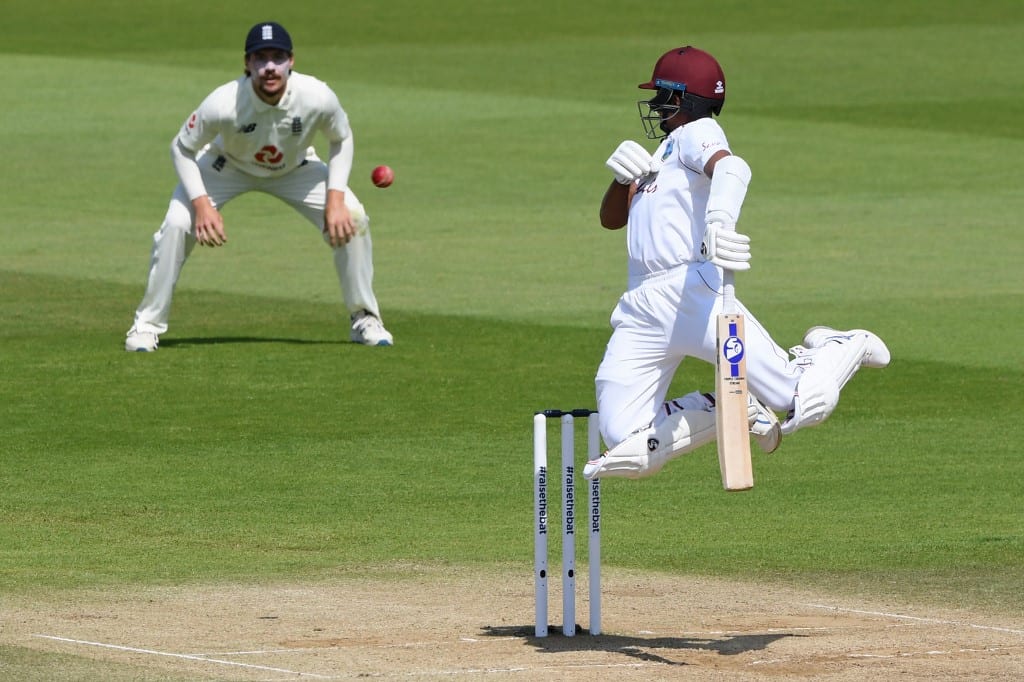 As England bowlers dominated the first 15 overs, everyone started to come at the edge of their seats anticipating a West Indies collapse. However, Chase and Blackwood had other plans. While Chase scored a gritty 37, Blackwood was the man of the hour for the West Indies as he scored 95. Dowrich chipped in with 20. Campbell came back to bat again and stitched winning partnership with skipper Holder to hand the West Indies an all-important win. 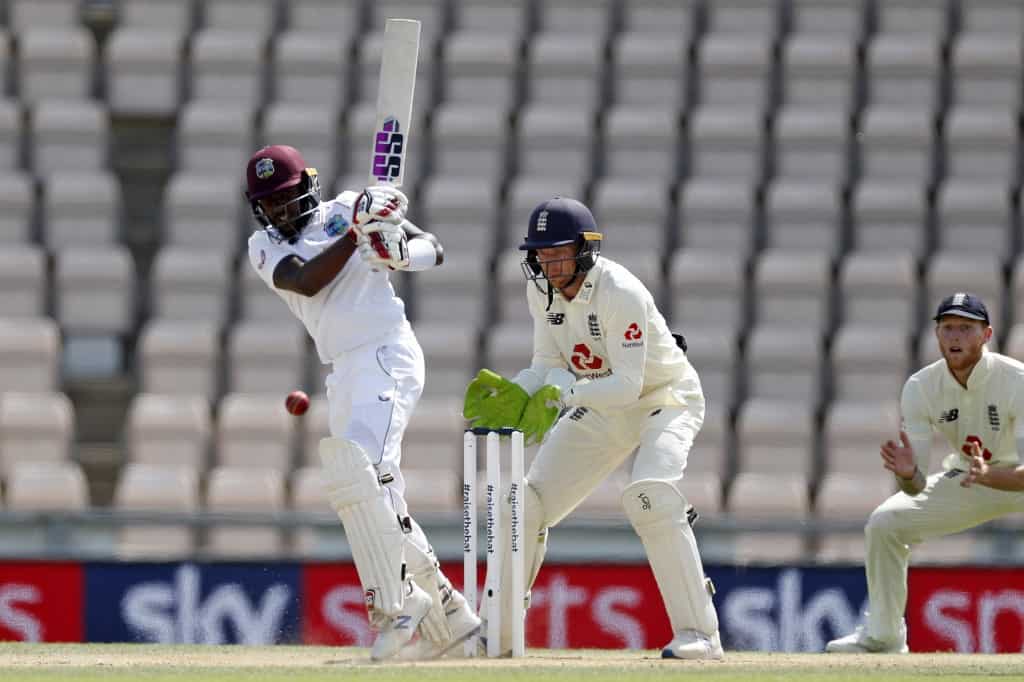 A forgettable start for Stokes as a captain. And for Holder, he continues to cement his own legacy in the history books.

The first Test post-pandemic goes to the West Indies as visitors take a 1-0 in the series. Man of the match, Shannon Gabriel.