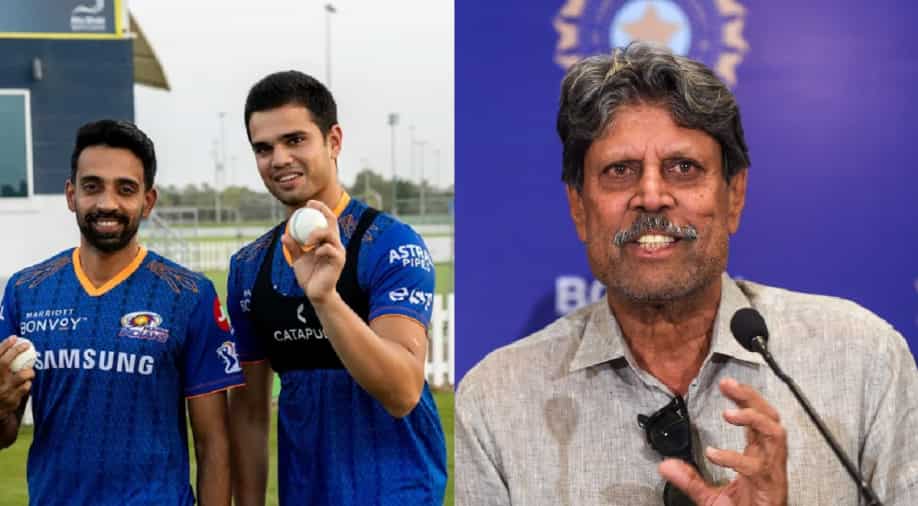 The legendary Kapil Dev shared his views on the kind of pressure Arjun Tendulkar has to deal with due to his surname. Kapil wants people to avoid comparing Arjun to his father Sachin Tendulkar.

The legendary Kapil Dev recently shared his views on the burden of expectations on Sachin Tendulkar's son Arjun Tendulkar. Kapil believes Arjun carries an extra burden of expectations on his shoulders because of his surname and that he should not be compared to his father, who is one of the greatest cricketers of all time. The 1983 World Cup-winning captain urged everyone to allow Arjun to play his cricket freely.

Arjun has been part of the Mumbai Indians (MI) for the last couple of seasons in the Indian Premier League (IPL) but has failed to make his debut for the five-time champions. The left-arm all-rounder was left to warm the bench for the entire season once again this year as he failed to get even one game for the Rohit Sharma-led side.

Mumbai Indians handed out debuts to several young players this season after bowing out of the race for the playoffs early due to a disastrous start with a record 8 defeats in their first eight games. They played as many as 21 out of the total 24 players in the squad but Arjun failed to make the cut.

Fans were expecting Sachin's son to make his IPL debut in the recently-concluded season but the MI management kept him waiting on the sidelines. Sharing his views on the young all-all-rounder, Kapil said being Sachin's son has its own perks and disadvantages. He also pointed out how Australian legend Sir Don Bradman's son changed his name due to the burden of expectations from others.

"Why is everyone talking about him? because he is Sachin Tendulkar's son. Allow him to play his own cricket and avoid comparing him to Sachin. Having a Tendulkar name has perks and disadvantages as well. Don Bradman's son changed his name because he could not soak that kind of pressure. He removed the surname Bradman because everyone expected him to turn out like his father," Kapil was quoted as saying by Hindustan Times on Uncut.

Also Read: Pak captain Babar Azam reacts to DK's 'he has potential to become No. 1 batter across formats' remark

The 1983 World Cup-winning captain said people should not expect too much and add pressure on Arjun. Kapil asserted if the youngster can even become half of the player that his father was, he should consider himself successful in his career.

"Don't put pressure on Arjun. He is a young boy. Who are we to say anything to him when he has the great Sachin as his father? But I would still just like to tell him one thing… Go and enjoy yourself. No need to prove anything. If you can become even 50 percent like your father… there is nothing better. When the name Tendulkar comes up, our expectations rise because Sachin was such a great," Kapil added.