Devon Conway punches his bat in frustration after dismissal, ruled out of T20 WC final with broken hand 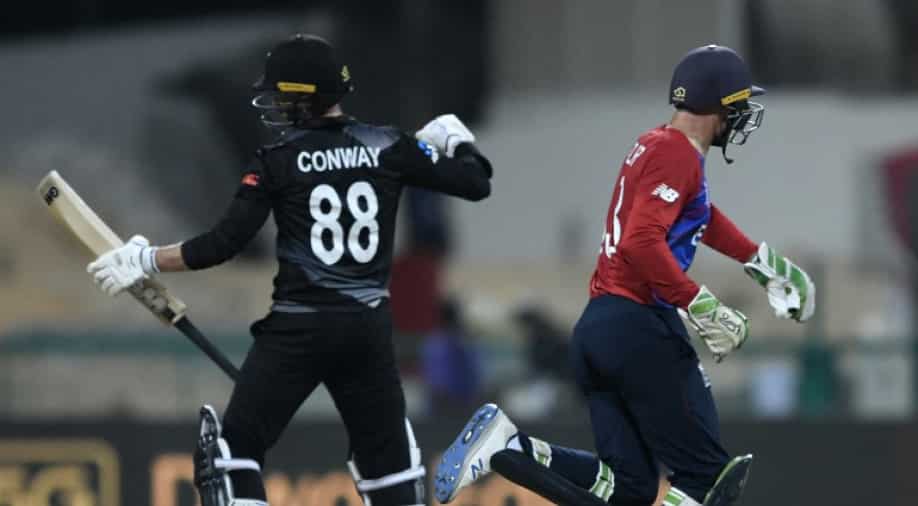 Devon Conway has been ruled out of the T20 WC 2021 final with a broken hand. Photograph:( AFP )

New Zealand batter Devon Conway has been ruled out of the T20 World Cup 2021 final with a broken hand. He had fractured his hand after punching his bat in frustration on his dismissal against England in the semi-final.

Conway has been ruled out of the final with a broken hand. He had sustained the injury during the semi-final match between New Zealand and England on Wednesday when he punched his bat in frustration after getting dismissed. Conway was taken for scans after the self-inflicted injury and an X-ray confirmed that he broke the fifth Metacarpal of his right hand.

Devon Conway has been ruled out of the @T20WorldCup Final and following tour to India with a broken right hand. Conway sustained the injury when he struck his bat immediately after being dismissed in last night’s semi-final. More Info | https://t.co/LCMOTJqmqc #T20WorldCup pic.twitter.com/JIm9o6Rhxe

It comes as a big blow for New Zealand ahead of the final as Conway was one of the batters in fine form for the Black Caps. He had scored 46 off 38 balls against England in the semi-final to help New Zealand chase down the target of 167 runs and win by five wickets to secure a spot in the final.

Conway had notched up 129 runs for New Zealand in the tournament so far and was a vital cog in their middle-order. New Zealand head coach Gary Stead said Conway is absolutely gutted to be ruled out the way he has been and that his reaction on the field was innocuous.

“He’s absolutely gutted to be ruled out like this at this time,” Stead said in a video shared by New Zealand Cricket.

“Devon is hugely passionate about playing for the BLACKCAPS and no one is more disappointed at the moment than he is – so we’re really trying to rally around him. It looked a pretty innocuous reactionary incident on the field, but the blow obviously caught the bat between the glove padding and while it’s not the smartest thing he’s done there’s certainly an element of bad luck in the injury," he added.

New Zealand will be looking to lift their maiden T20 World Cup title when they lock horns with Australia in the final on Sunday. Both the teams have never won the T20 World Cup and will be aiming to give their all in the much-awaited summit clash.