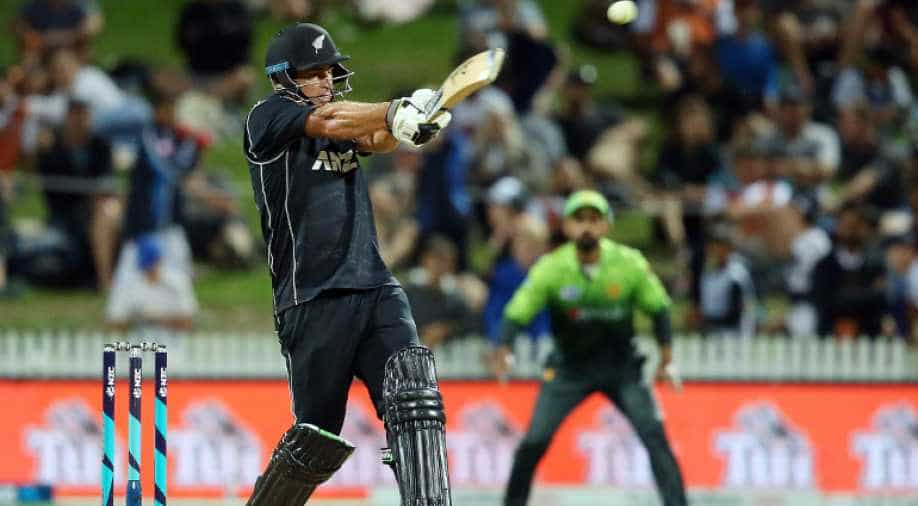 Big-hitting Colin de Grandhomme blasted New Zealand to a five-wicket win over Pakistan in the fourth one-day international in Hamilton on Tuesday.

De Grandhomme bludgeoned the Pakistan attack with an unbeaten 74 off 40 balls to reinvigorate New Zealand's run chase as the hosts were struggling to reach a 263-run target.

"Everything just seemed to be hitting the middle tonight," said de Grandhomme, whose innings included five sixes and seven fours.

The result puts New Zealand up 4-0 in the five-match series and sets a new record for the Black Caps of 11 consecutive international victories.

The streak includes convincing wins over the West Indies in all formats of the game and keeps alive the prospects of an ODI series whitewash against Pakistan in Wellington on Friday.

However, it was a much improved performance from Pakistan, who were skittled for just 74 in their previous outing.

They looked set for another heavy defeat after a horror start saw them at 11 for two but Mohammad Hafeez notched 81 to set a competitive target.

Others in the misfiring Pakistani batting line-up also found form, with Fakhar Zaman, Haris Sohail and captain Sarfraz Ahmed all posting half centuries.

Pakistan opted to bat first after winning the toss, promoting hard-hitting allrounder Faheem Ashraf to open in the search for runs.

The gamble backfired when Faheem departed for one and Babar Azam soon followed after a dynamic spell from Black Caps paceman Tim Southee.

Pakistan's batsmen were able to steady the innings but only Hafeez managed to push on beyond 50, smashing 22 from the final over.

The other major talking point of the Pakistan innings was a head injury to Shoaib Malik, who ran into the path of fielder Colin Munro's throw while trying to scamper back to his crease.

The ball hit him flush on the head and officials later said he showed signs of delayed concussion and did not return after the innings break.

New Zealand set about the run chase with gusto as opener Colin Munro brought up his half-century off 33 balls.

They appeared to be cruising to victory at 88 without loss before squandering four wickets for 11 runs.

Shadab made a double breakthrough to dislodge Munro (56) and Martin Guptill (31) in successive balls, then followed up by coaxing an edge off Tom Latham.

Rumman Raees contributed by ruining Ross Taylor's 200th ODI appearance when he trapped the veteran batsman lbw for one.

Tight bowling from the tourists denied Kane Williamson runs and the New Zealand captain was dismissed for 32 trying to break the shackles with a lusty swing that Rumman caught on the boundary.

With New Zealand looking shaky, de Grandhomme came to the crease and put the match beyond Pakistan, with support from Henry Nicholls, who scored an unbeaten 52.