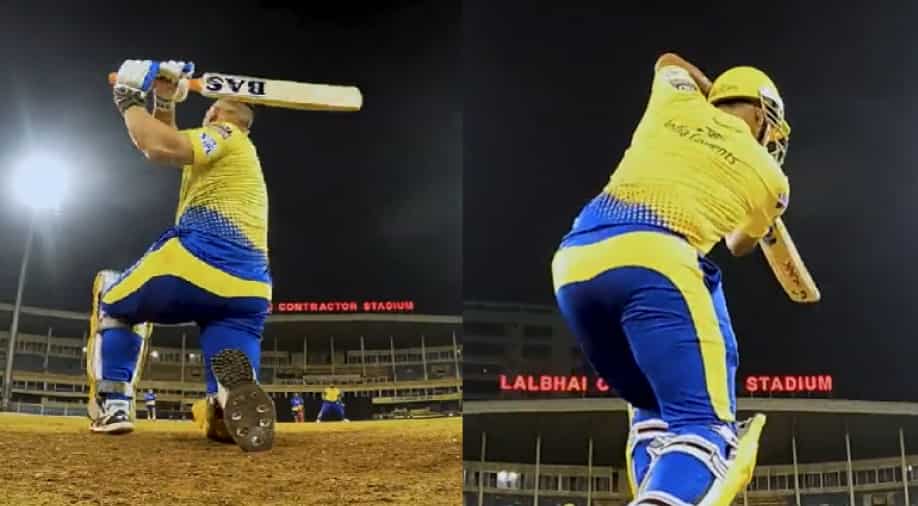 Chennai Super Kings (CSK) have already begun their preparations for the upcoming season of the Indian Premier League (IPL) as the MS Dhoni-led side gears up to defend their title. CSK defeated Kolkata Knight Riders in the final last year to lift their fourth IPL trophy, completing a remarkable comeback having missed out on a spot in the playoffs in IPL 2020.

While not the entire squad has joined CSK's ongoing camp in Ahmedabad, several stars including the likes of captain MS Dhoni, veteran batter Robin Uthappa, Ambati Rayudu and others have started training with the rest of their teammates ahead of the new season. The others are expected to join soon as the start of the season gets closer.

Chennai Super Kings have been sharing several videos and photos of their players training in the camp ahead of the new season. On Friday, CSK shared a video clip of a stump-cam recording of Dhoni and Uthappa's batting session. In the video, the likes of Dhoni, Uthappa and C Hari Nishanth can be seen batting.

The glorious video of the CSK tri playing some brilliant shots in the nets went viral on social media. Check out the video:

CSK will begin their IPL 2022 campaign against Kolkata Knight Riders in the season-opener at the Wankhede Stadium in Mumbai. The entire league stage of IPL 2022 is all set to be played across four venues in Mumbai and Pune while the playoffs will be held in Ahmedabad.

Also Read: 5 Indian players who can replace Deepak Chahar for CSK if he is ruled out of IPL 2022

CSK will be looking to successfully defend their title after roping in some quality players at the IPL 2022 mega auction. While Dhoni & Co. managed to get back some of their old players like Dwayne Bravo, Deepak Chahar and Ambati Rayudu among others, CSK have also added a number of talented youngsters to their ranks.

However, CSK have been dealt with a huge blow ahead of the new season as their most expensive buy at the mega auction - pacer Deepak Chahar is likely to miss the first couple of weeks of IPL 2022 due to an injury. In his absence, CSK will hope for a good show from the likes of Tushar Deshpande, Shivam Dube and Rajvardhan Hangargekar among others.