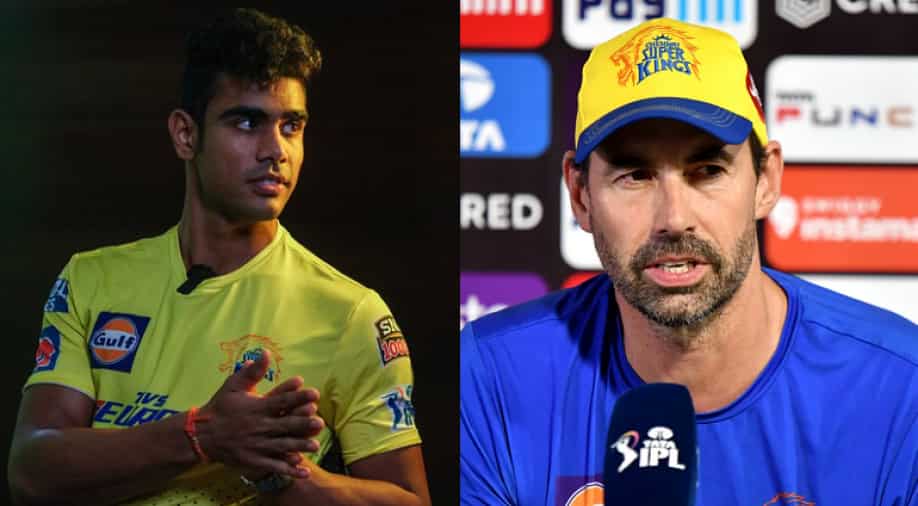 Stephen Fleming explained why Rajvardhan Hangargekar has not played for CSK yet. | Photo - CSK/IPL | Photograph:( Others )

Chennai Super Kings (CSK) head coach Stephen Fleming has explained why young all-rounder Rajvardhan Hangargekar is yet to make his debut for the Ravindra Jadeja-led side.

Chennai Super Kings (CSK) head coach Stephen Fleming recently opened up on the lack of chances for young all-rounder Rajvardhan Hangargekar in the ongoing Indian Premier League (IPL) 2022. CSK had roped in the India U-19 star at the IPL 2022 mega auction earlier this year for a sum of Rs 1.5 crore (INR 15 million).

While he was expected to feature regularly for the franchise in the absence of premier pacer Deepak Chahar, who has already been ruled out of the season due to an injury, Hangargekar is yet to make his debut for CSK. The young all-rounder is known for his pace with the new ball and can also bat down the order.

Many have been left surprised over the non-inclusion of Hangargekar in CSK's playing XI in their first eight games this season. The youngster has been left to warm the bench despite CSK's poor run so far this season as the Ravindra Jadeja-led side has managed only two wins in eight games.

CSK head coach Fleming explained why Hangargekar is yet to feature for CSK this season and revealed they don't want to rush the talented youngster as it can damage his confidence. Fleming stressed the franchise wants to be very careful in nurturing Hangargekar.

"You have to be very careful. I know he’s (Rajvardhan) performed at the Under-19 level but this is a step up. We’re very conscious of the skills that he needs to perform. We don’t wanna just throw him in and damage him. We want to make sure we realise the potential that he’s got," said Fleming.

Shivam Dube is currently ahead of Hangarekar in the pecking order considering his experience and his hard-hitting abilities. Dube has been a regular in the CSK playing XI and has played a couple of brilliant knocks for the team but has been far from consistent.

In the absence of Chahar, CSK's bowling attack has struggled immensely while their batters too have failed to make an impact so far this season. The likes of Ruturaj Gaikwad, skipper Jadeja and opener Robin Uthappa have all shone in patches and have been inconsistent otherwise.