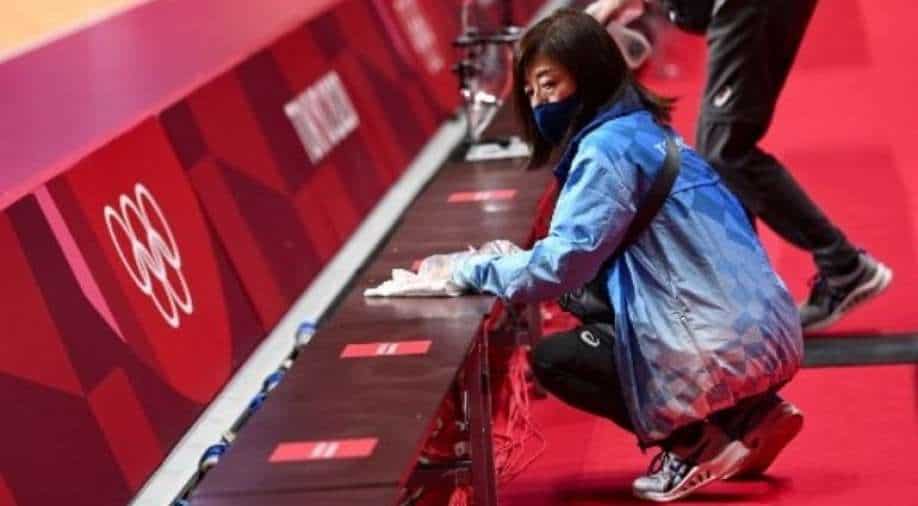 Volunteers clean the photo press seating during preparations at Yoyogi National Stadium, venue for the handball tournament during the Tokyo 2020 Olympic Games, in Tokyo on July 23, 2021. Photograph:( AFP )

Nearby, crowds milled around the Olympic museum next to the renovated stadium, and lined up for the chance to take a photo in front of an installation of the multi-coloured Games rings

Hundreds of people gathered outside the Olympic Stadium in Tokyo on Friday, hoping for a glimpse of an opening ceremony that will take place behind closed doors because of strict anti-coronavirus rules.

Only a few hundred dignitaries and officials will be allowed into the 68,000-capacity venue to watch the opening extravaganza of the Games that were postponed last year because of the pandemic, but crowds of residents from Tokyo and beyond flocked to the venue looking to soak up the atmosphere.

"We're here for the atmosphere, the light-up and the fireworks," Mako Fukuhara told AFP outside the stadium.

"We're hoping to see the opening ceremony, or at least just get a feel for it," she said.

Nearby, crowds milled around the Olympic museum next to the renovated stadium, and lined up for the chance to take a photo in front of an installation of the multi-coloured Games rings.

For months, polls showed people in Japan were opposed to holding the Games this summer, particularly as virus cases rise in Tokyo and beyond.

But opposition appeared to soften as athletes began arriving in the country, and thousands of people turned out across Tokyo earlier in the day for an Olympic aerial display by the Japanese air force.

Outside the Sendagaya train station near the stadium, around a dozen protesters held a small demonstration opposing the Olympics.

But others used loudspeakers to offer their support for the postponed Games.

"I welcome the opening of the Olympics, it's a proud moment for me as a Japanese person," one woman said.

Aiko Hirota arrived six hours before the ceremony to get a taste of the event.

"Despite the fact that it's going to be held without spectators, I'm impressed by the atmosphere of the people here," she said.

"I hope that even if the Games is held without spectators, the athletes can see that this many people support them."

Some came from even further afield to be part of the experience, including Chinese citizen Cho Kouko, who travelled from Osaka in western Japan.

"I'm here to support the athletes from China... I want to greet them when they drive past."

Han Yi-ting, a Tokyo resident from Taiwan, said she was hoping for a good view of the fireworks expected to light up the sky during the three-and-a-half hour long ceremony.

"I've waited for this for a year, I'm looking forward to it," she said.

"I thought it was a shame that it had to be postponed last year, but now it's happening again, and the atmosphere is great."