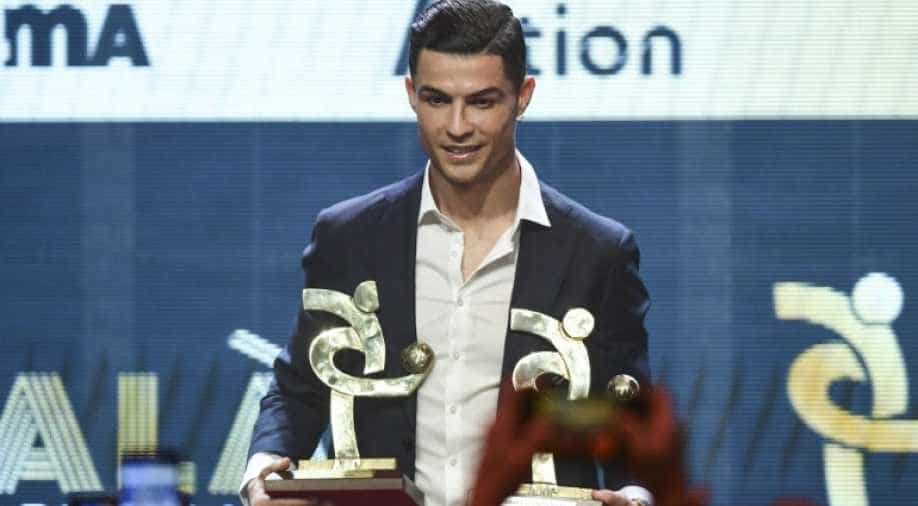 Ronaldo receives the award of best player of the year of the Italian championship Serie A during the 'Gran Gala del Calcio' awards ceremony Photograph:( AFP )

The five-time winner of the Ballon d’Or award failed to rank in the top two for the first time since 2010.

Juventus giant Cristiano Ronaldo skipped the Ballon d’Or ceremony to receive Serie A award, where he was also named in the Italian top flight’s best XI following his debut season at the club.

Ronaldo attended the Gran Gala del Calcio in Milan on Wednesday to collect the award, skipping the Ballon d’Or ceremony in Paris where he was third in the voting for the best player in the world behind Lionel Messi and runner up Virgil Van Dijk.

The five-time winner of the Ballon d’Or award failed to rank in the top two for the first time since 2010.

Ronaldo turned up at the Italian event about an hour before the main award was announced, arriving two hours later than the other guests.

On receiving the award, Ronaldo thanked his Juventus teammates and expressed his happiness for being able to play in the league.

“It’s an honour to hold this award...I thank my Juventus teammates,” said Ronaldo in Italian. “I am very happy to play in Italy, it’s a very difficult league. Thanks to everyone for having voted for me. I want to do as well this year too,” he added.

Ronaldo also took to social media to express his gratitude at winning the award.

“For me it’s a pride to be the best player in Serie A, I thank my fellow Juve and all the players who voted for me. Last year was my first year in Italy, a difficult championship but I’m very happy. And I want to make this year equal to last,” he posted with a picture of him holding his two trophies.

The 34-year-old Ronaldo got transferred from Real Madrid to Juventus in 2018 and he helped Italian club win their eighth consecutive Serie A title.

The Juventus forward has scored a total of 28 goals in 43 matches for the team so far, out of which he scored 21 goals in the league. The average of 0.65 goals-per-game is Ronaldo’s lowest tally since his Manchester United days, ten years ago.

Women footballers were awarded for the first time at the Italian ceremony with Roma and Italy forward Manuela Giugliano winning the top prize.

The awards are voted by an amalgamation of footballers, coaches, referees and journalists.