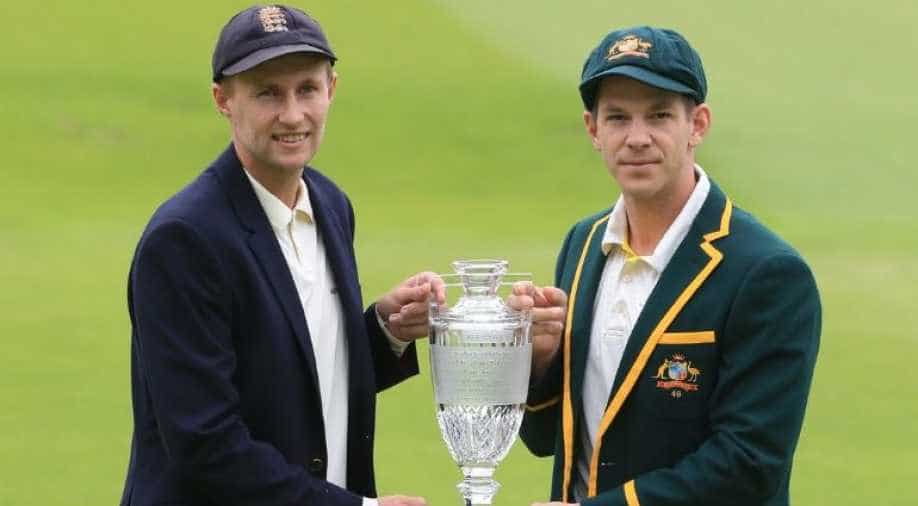 England's captain Joe Root (L) and Australia's captain Tim Paine hold the Ashes on the eve of the first Ashes cricket test match between Australia and England at Edgbaston in Birmingham. Photograph:( AFP )

Kevin Pietersen also responded to the media report and said that if any England player decides to back out from the iconic tour then they will have his full backing.

A report in the UK media house suggested that it is still unclear whether families of the England cricketers travelling to Australia will be permitted to stay with them during the Ashes, beginning on December 8.

Former England skippers Michael Vaughan and Kevin Pietersen fumed at the reports. Vaughan went on to say that the Ashes series should be cancelled if families are not allowed to stay with the players for the four-month-long tour of Australia due to strict COVID-19 protocols.

"Read reports today that England cricketers may not be able to have family members with them down under this winter .. Quite simply if they can’t they should call the Ashes off .. 4 months away from your family is totally unacceptable .. #Ashes," Vaughan wrote on his Twitter handle.

Kevin Pietersen also responded to the media report and said that if any England player decides to back out from the iconic tour then they will have his full backing.

"Any ENG player that pulls out of this Ashes, if they seriously can't see their families for FOUR MONTHS, has my full backing. Families are the most important part of a players make up. And even more so in the current climate! FOUR MONTHS with no family on Ashes Tour?," he tweeted.

According to Cricket Australia, a solution can be worked out and the tournament is still many months away.

"It's only June and England are not due to arrive until November," a CA spokeswoman told the 'Sydney Morning Herald'.

"We'll be going through the same process we did with India last summer."