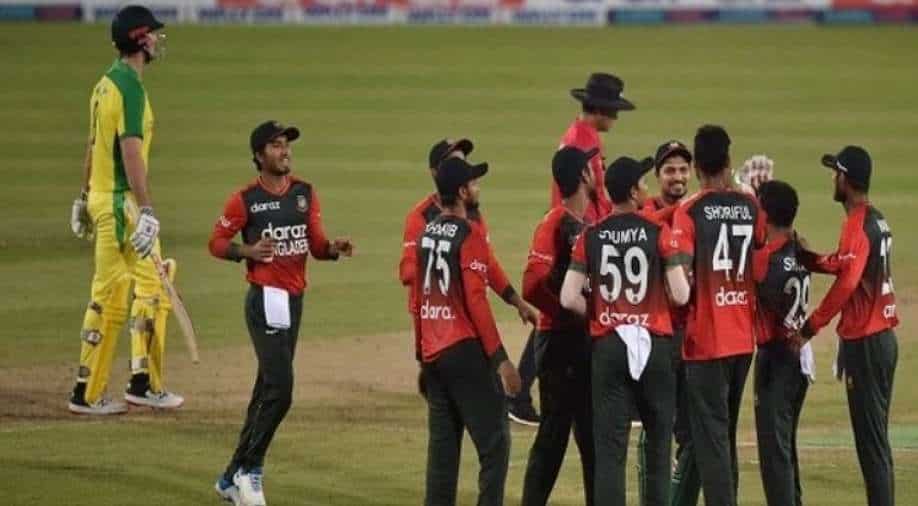 With this win, Bangladesh has gained an unassailable 3-0 lead in the five-match series. The fourth T20I will now be played on Saturday

A spirited bowling performance helped Bangladesh defend 127 and defeat Australia by 10 runs in the third T20I of the five-match series here at the Shere Bangla National Stadium on Friday.

With this win, Bangladesh has gained an unassailable 3-0 lead in the five-match series. The fourth T20I will now be played on Saturday.

Chasing 128, Australia got off to a bad start as skipper Matthew Wade (1) was sent back to the pavilion in the second over of the innings. Ben McDermott and Mitchell Marsh then joined hands and the duo chipped away at the runs steadily.

McDermott and Marsh put on 63 runs for the second wicket and the stand finally came to an end in the 14th over as Shakib Al Hasan bowled McDermott (35), with Australia still needing 57 runs for the win.

After defeating Australia in a series for the first time, take a look back at the other firsts achieved by the Tigers over the course of their history 👇https://t.co/gWTJue7U7J

In the very next over, Moises Henriques (2) was dismissed and Australia was left in a spot of bother. The visitors needed 22 to win off the final over, but they were not able to get over the line, giving Bangladesh a win.

Earlier, Nathan Ellis's hat-trick in the final over helped Australia restrict Bangladesh to 127/9 in the allotted twenty overs. The hosts were left struggling at 47/3 in the ninth over as Soumya Sarkar (2), Naim (1), and Shakib Al Hasan (26) were all sent back to the pavilion.

Skipper Mahumudullah played a vital knock of 52 runs but he did not find support at the other end. In the end, Ellis took a hat-trick in the final over of the innings and as a result, Bangladesh was restricted to under the 125-run mark.