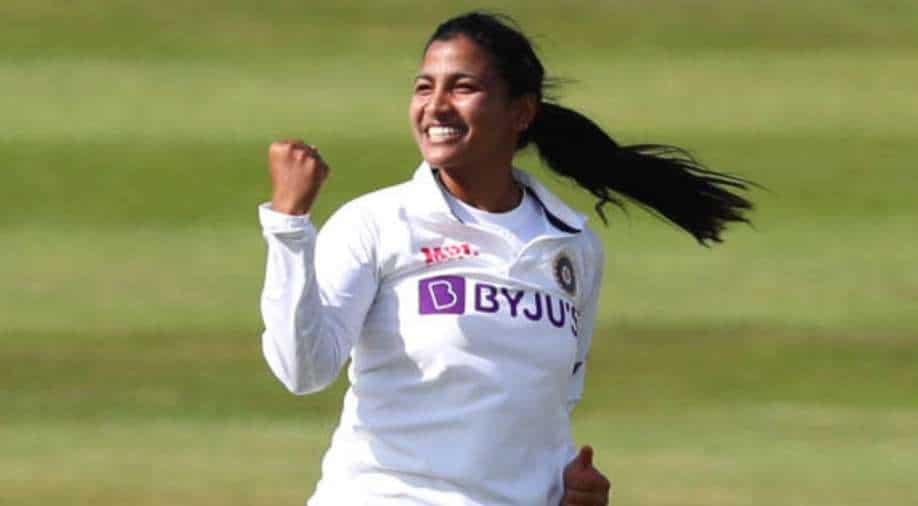 India Women's cricketer Sneh Rana scripted a unique record as she became the first Indian cricketer, male or female, to register a score of 50-plus and a four-wicket haul on Test debut

The women’s Test between India and England ended up in a thrilling draw in Bristol as Sneh Rana and Taniya Bhatia held their ground to frustrate the hosts. While Shafali Verma, was named the player of the match for her heroics with the willow in both the innings, Sneh Rana’s unbeaten 80 ensured India don’t end up losing their first Test match in almost seven years.

As a result, Rana ended up scripting a unique record as she became the first Indian cricketer, male or female, to register a score of 50-plus and a four-wicket haul on Test debut.

Earlier during England’s first and only innings, the left-arm spinner scalped four wickets to bring India back into the game at a time when the duo of Heather Knight and Nat Sciver were looking to dominate the proceedings with the bat.

Sneh Rana is the first ever Indian cricketer (men/women) with a 50+ score and 4+ wicket haul on Test debut.#ENGvIND

Rana’s left-arm spine proved to be a potent threat on a Bristol pitch, offering a bit of grip and bounce, as she dismissed opener Tammy Beaumont, Amy Jones, Georgia Elwiss and Anya Shrubsole to end up with four wickets in the first innings and be India’s pick of the bowlers.

While India suffered a collapse with the bat in the first innings following a record-breaking opening partnership between Shafali and Smriti Mandhana, the rest of the batting unit faltered against a high-quality English bowling unit with only Deepti Sharma and Pooja Vastrakar managing to reach the double-digit mark beside the two openers. India posted 231 and were asked to bat again as England enforced the follow-on.

However, it was the second innings when India’s batting unity blossomed. Despite losing Mandhana for eight, India held their ground as Deepti was promoted at number three. The all-rounder scored a gritty half-century while Shafali continued to play her natural game and ended up with 63. Deepti was sent packing at 54. Punam Raut chipped in with a crucial 39. But India did suffer another collapse with Mithali Raj, Harmanpreet Kaur and Pooja Vastrakar departing cheaply.

When an England win was looking inevitable, Rana and Bhatia tackled the threat of the English bowling unit and showed grit and resilience to see off the day as the duo scored 80 not-out and 44 not-out respectively.

Rana, who was making her comeback into the Indian senior team after five years, would remember this match for long as she not only scripted a personal record but also guided India to a memorable draw in Bristol.