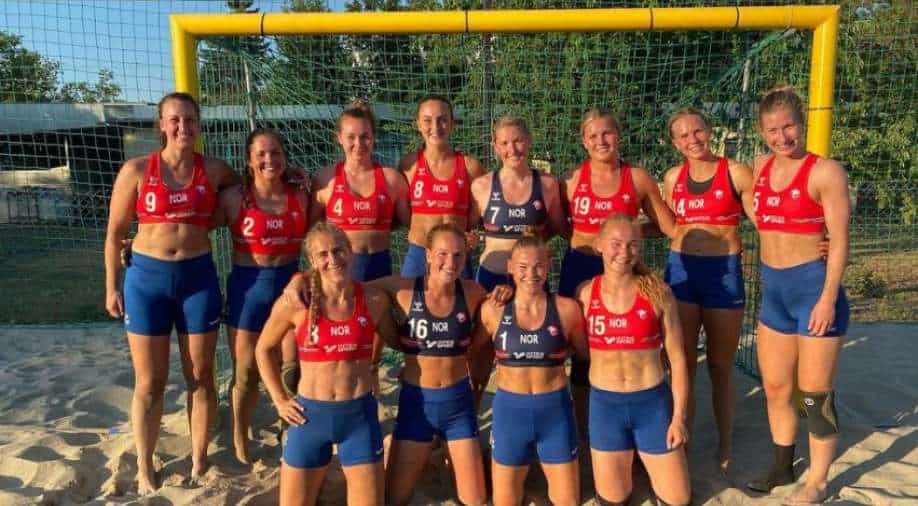 Ahead of the Olympics in Japan, the Norwegian women's beach handball team has been fined by the disciplinary committee of the European Handball Federation (EHF) after they wore shorts in the match against Spain at the European Beach Handball Championship last week.

Each player in the women's team was fined $1,768 by the EHF for not wearing bikinis.

Norwegian Volleyball Federation president Eirik Sordahl slammed the move, saying: "In 2021, it shouldn't even be an issue."

The country's sports minister Abid Raja hit out at the move saying it was "completely ridiculous".

"What a change of attitude is needed in the macho and conservative international world of sport," Norway's sports minister added.

The Norwegian Federation said: "We at NHF stand behind you and support you. Together we will continue to fight to change the rules for clothing so that players can play in the clothes they are comfortable with."

The EHF however said that the shorts were "not according to the Athlete Uniform Regulations defined in the IHF beach handball rules of the game."

Norway's team had reportedly asked the EHF for permission to play in shorts ahead of the bronze medal match at the games but it was told they could be fined. They wore the uniform stipulated by the federation until the last match.

According to beach handball rules, women must wear tops and bikini bottoms which should be "a close fit" and "cut on an upward angle toward the top of the leg" and the side depth should be no more than 10 centimetres.

The male players are required to wear shorts.

The issue exploded on Twitter as several people hit out at the move including tennis legend Billie Jean King.

The Norwegian Women’s Beach Handball team is facing fines for wanting to wear shorts instead of bikini bottoms. The bottoms are not to cover “more than 10cm on any sides.”

The sexualization of women athletes must stop. https://t.co/IZEzbrE0Iw

Bravo Norwegian Women's Beach Handball team for standing up to the rules regarding the hypersexualized uniforms female players are expected to wear while playing. There is no excuse for forcing women to wear tiny bikinis while men can wear shorts. Enough is enough! pic.twitter.com/3j0guEbe8U

The European Handball Association should be ashamed of themselves - Norwegian men's and women's teams side by side.