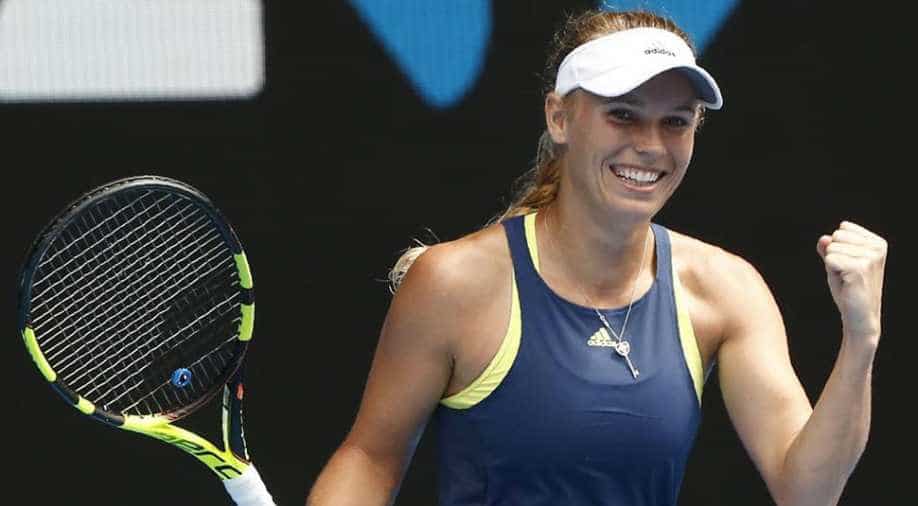 Caroline Wozniacki won the first set of the Australian Open women`s final 7-6 (7/2) against Simona Halep as she attempts to claim a first-ever Grand Slam title on Saturday.

The imposing Dane got an early break to go 2-0 up and it went with serve until Halep pounced to break back for 4-5 and take it to a tiebreak.

Wozniacki quickly took charge, winning the tiebreak 7-2 when Halep sent a forehand into the net.

Halep and Wozniacki are looking for their first. They are both in their third major decider but have never won.

Wozniacki, 27, has long carried the unwanted moniker of best player never to claim a major, having reached the US Open final in 2009 and 2014, and first becoming number one in 2010.

She is in her 43rd Grand Slam appearance and desperate to get off the mark.

"I always believed in myself," she said. "I knew that if I can stay healthy and I work hard, my game is good enough for it."

Her hard work was rewarded with a renaissance in 2017, reaching eight finals -- winning in Tokyo and at the season-ending WTA Finals, where she banished another hoodoo by registering a first career win over Venus Williams.

She continued her sparkling form at the start of this year and has 10 wins and only one defeat, to Julia Goerges in the warm-up Auckland final.

The gritty Halep, 26, made her only previous Grand Slam final appearances at Roland Garros in 2014 and 2017.

The Romanian has only beaten Wozniacki twice in their six previous matches, the most recent meeting ending in a 6-0, 6-2 battering by the Dane at the 2017 WTA Finals in Singapore.

"The way she's playing, she's not missing," said Halep of Wozniacki. "She's running very well. So she's a strong opponent. I played her many times. I won against her few times.

"It's going to be a different match. Emotions are there. Pressures are there for both of us. We'll see what is going to happen."