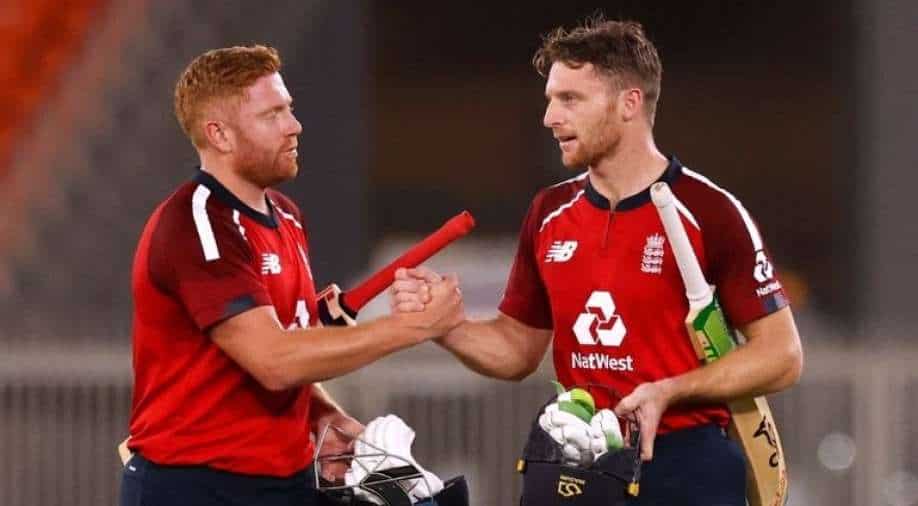 Jos Buttler's blistering 83 not out trumped Virat Kohli's majestic half-century as England beat India by eight wickets in the third Twenty20 International to go 2-1 up in the five-match series in Ahmedabad on Tuesday.

Kohli struck an unbeaten 77 off 46 balls to rescue India from a top-order collapse and help them to a competitive 156-6.

England overwhelmed the target with 10 balls to spare with Buttler smashing four sixes and five fours in his blistering 52-ball knock.

Earlier put in to bat, India got off to a horror start mirroring their batting struggle in the series opener.

Their top order batsmen looked in discomfort against the pace and bounce of Mark Wood (3-31) and Jofra Archer.

Archer floored a return catch to reprieve Rohit Sharma off his first ball but England did not have to wait long for a breakthrough.

Wood breached KL Rahul's defence with an express delivery in the third over, dismissing the opener for his second successive duck in the series.

If pace got rid of Rahul, bounce did the trick against Rohit and Ishan Kishan.

India were 24-3 after the six powerplay overs and 55-3 at the halfway stage of their innings before Kohli counter-attacked.

The home captain smashed four sixes and eight boundaries as the hosts milked 56 runs off the last four overs.

Buttler smashed a couple of sixes in that over and raced to a 26-ball fifty with his sustained aggression.

The English batsman got a life on 76, when Kohli, usually a safe catcher, dropped him at point after he had played a reverse-sweep.

Ahmedabad hosts all five matches with the fourth Twenty20 International scheduled on Thursday.

The last three matches are being played behind closed doors following a rise in COVID-19 cases in the state of Gujarat.