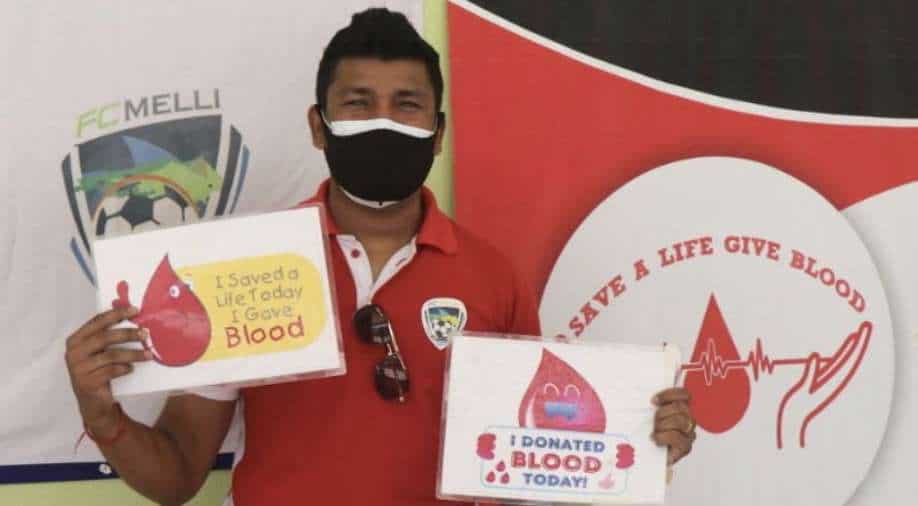 As someone who has always been known to take up steep challenges, Nirmal Chhetri, the former national team defender preferred to lead from the front as India battles the ongoing second wave of the COVID-19 pandemic. Nirmal Chhetri was once hailed by Gerd Muller as “brilliant,” during Bayern Munich U23s visit to Kolkata in 2009 wherein he had made quite an impression in his duels against a promising but young Thomas Mueller.

Nirmal Chhetri was once hailed by Gerd Muller as “brilliant,” during Bayern Munich U23s visit to Kolkata in 2009 wherein he had made quite an impression in his duels against a promising but young Thomas Mueller. And then in 2012, Thomas, who represented Bayern Munich in Bhaichung Bhutia’s farewell match in Delhi, had mentioned repeatedly about Nirmal, saying “he was difficult to get past.”

As someone who has always been known to take up steep challenges, Nirmal, the former national team defender preferred to lead from the front as India battles the ongoing second wave of the COVID-19 pandemic.

Only the other day, Nirmal organized a blood donation drive in his hometown of Melli in Sikkim, which he feels was the need of the hour as “people from across the nation have joined hands to help one another,” all in an effort to take the society forward together.

"Social work and giving back to my community as much as possible is something very close to my heart. With the number of cases rising across the country we received a call from the local blood bank about a shortage as the vaccination drive was all set to begin,” Nirmal informed AIFF.

“Hence, all of us at my local club FC Melli worked non-stop and were able to organize a camp in just two days at the local football ground," he added. "We had a lot of challenges with regards to the security and health protocols but the whole team worked in great coordination to ensure they were followed and make the drive a success."

"We were inspired by a local organization named Blood Army of Sikkim and with their guidance, we were able to collect 58 units in all for the blood bank at the Namchi District Hospital in South Sikkim."

Last year, in August 2020, the 30-year-old led had taken up an initiative in the fight against COVID-19 as he had organized a sanitisation drive in Melli, covering key areas of the town along with 500-600 homes. In the past, he has been highly active in his local community -- leading afforestation, cleanliness and anti-drug awareness drives as well.

"Whenever I get a break from football, I am always thinking about how I can help my local community and contribute as much as I can. The support I have received over my career from the people back home has always been crucial and now, it's my time to give back to society and help my fellow citizens," Nirmal, who was part of the triumphant 2012 Nehru Cup squad expressed.

A number of footballing icons in the country - Sunil Chhetri, CK Vineeth, Sahal Abdul Samad and many more, have already come forward to lend their support in the fight against COVID-19. Chettri urged his fellow colleagues to keep up the good work and offer help in as many ways as possible.

"Cases are rising fast and we need to help each other. Help can come in different forms and is great to see my fellow footballers also join the fight."

"Social media is a great platform for players to influence their followers and reach out to as many people as possible. I urge everyone to contribute in whichever way you can and help the country and people," he averred.

The two-time SAFF Championship winner also stressed on the importance of people 'fighting together' to defeat the coronavirus and follow the safety guidelines issued by the authorities.

"It is critical that all of us remain united in this battle and fight together. We need to keep ourselves and our loved ones safe by following the SOPs, make others follow them and at the same time, we need to offer as much support as possible in any form to those in need," he stated.