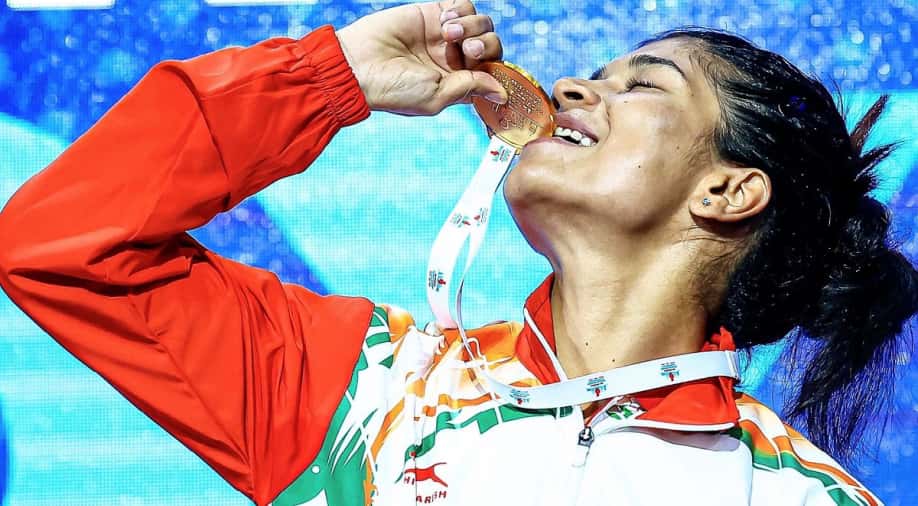 Indian's Nikhat Zareen has urged parents in the country to change their mentality towards daughters after clinching gold medal at the Boxing World Championships 2022.

After winning a gold medal in the Women`s World Boxing Championship in Turkey, Indian pugilist Nikhat Zareen has urged the parents to change their mentality towards a girl child and support them in whatever they want to do in their lives.

"There are still some people in the society who feel sad when they see that a girl child is born but I feel that if a daughter is born then it is Goddess Laxmi. So, nowadays daughters are making the country as well as their family members proud. So, I think that they should change their mentality and support their daughters. Whatever their dreams are of becoming a doctor or Police officer or a boxer whatever it is. You need to support and she will make her parents feel happy. So, I do not believe in girls or boys. For me both are equal. Girls are as strong as boys," Zareen told ANI.

After winning the gold medal Bollywood superstar and Nikhat Zareen`s favourite actor Salman Khan tweeted to congratulate her on her achievements. For World Champion pugilist, it was a dream come true.

"When I saw his tweet I was like dancing. I was happily enjoying that and I was emotional at the same time that for so many years I was waiting for Salman Khan`s message and tweet. It finally happened and I was very happy I was on cloud nine at that day," said Zareen.

After becoming only the fifth Indian woman pugilist to win a gold in the Women`s World Boxing Championship, congratulatory messages are pouring in for the boxer."I mean it has just been three days since that day I am only giving interviews and people are messaging me. My phone is full of messages, DMs and notifications. So, yes I am excited to meet my family and I wanted to celebrate this with my family and friends," she said.

The next target for the 25-year-old is to win an Olympic medal for the country and the next immediate target for her is to shift to the 50 Kg weight category from 52 in order to compete in Commonwealth Games 2022 in Birmingham.

"I have just won a gold medal in World Championship but it is just a stepping stone for me. It is just a start I have just started and now the responsibility is even more as expectations have increased. So, I will work even harder. I know that my ultimate goal of winning an Olympic medal in Paris is not going to be easy. I will have to work hard and I will work hard and I would like to give a better performance. Right now my focus is on the Commonwealth Games. First I have to take part in selection trials of Commonwealth Games and then I would like to win a CWG medal over there," said Nikhat Zareen.

For Nikhat Zareen, this medal has come after years of hard work and toil. The importance of her achievement can best be realized by her but now she realizes its importance even more when she sees the response of the people. Even the Prime Minister of the country Narendra Modi took to Twitter to congratulate her.

"This medal was special for me the day I won it because it was a result of so many years of my hard work which resulted in me winning the medal for the country. I was very happy to win a medal for my country but when I returned back after playing and winning the medal I saw people messaging me on my phone as well as tweeting me. Everyone is celebrating my medal. I got to know that our Prime Minister Narendra Modi also tweeted about it. For me, his tweet about my win was a big thing. I am getting so much of love and support and to ensure that this love keeps pouring in I will keep working hard and I will try to win more medals to make people happier and make my country feel proud," explained Nikhat Zareen.