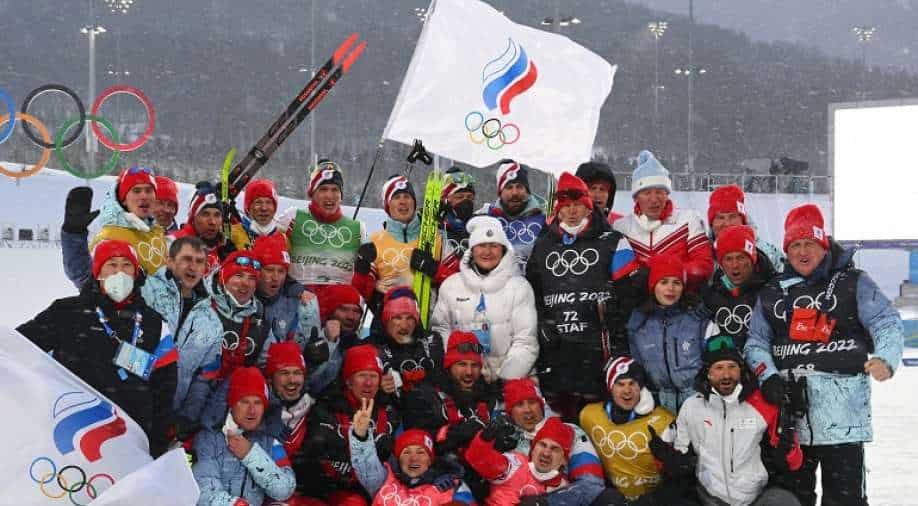 The ROC team finished one minute 7.2 seconds ahead of the Norwegian team Photograph:( AFP )

The team representing the Russian Olympic Committee (ROC) storm to victory in the men's 4x10 km relay at the Beijing Olympics.

The team representing the Russian Olympic Committee (ROC) made the most of a big lead built up in the first half of the race to storm to victory in a punishing men's 4x10 km relay at the Beijing Olympics on Sunday.

The ROC team finished one minute 7.2 seconds ahead of the Norwegian team, with France picking up a superb bronze medal after a dogged display, 9.2 seconds after Norway.

Whirling winds whipped up the powdery, dry snow, reducing visibility to the point where the stadium floodlights had to be turned on so that fans and television viewers could see the action.

ALSO READ: IOC urges give peace a chance after Ukrainian skeleton slider calls for 'no war in Ukraine'

The first two racers in each team used the classic style and the second pair skied freestyle, each for three laps of 3.3 km.

Just as their victorious women's team did on Saturday, the Russians made an early break as lead man Alexey Chervotkin accelerated in the middle of his second lap, building up a lead of more than 12 seconds to the chasing pack by the halfway point of his leg.

By the time he handed over to Alexander Bolshunov, who won gold in last week's skiathlon and silver in the 15-km classic, the race was all but over and Bolshunov continued to set a searing pace.

Norway's Paal Golberg broke away from the German and Italian racers on a one-man mission to rein in the Russian, but by the third leg, the Norwegians were dragged back into a five-team knot of chasers alongside Sweden, Finland, France and Germany.

The Finnish and German challenges melted away before the fourth leg, leaving Norway, Sweden and a stubborn French team to fight it out for the remaining two medals.

The Swedes were next to drop behind, leaving 2022 Olympic sprint champion Johannes Klaebo in a fierce battle for silver with Frenchman Maurice Manificat as the two skied most of the final leg neck and neck.

Far in front of them, Sergey Ustiugov was gliding across the line waving the flag of the ROC as Klaebo made his break for silver, the exhausted Manificat unable to respond.

For the Russians, it was a case of going one better than they had in 2018 when they took silver behind Klaebo and Norway with three of the same team. This time it was new man Ustiugov who was given the honour of securing the gold.