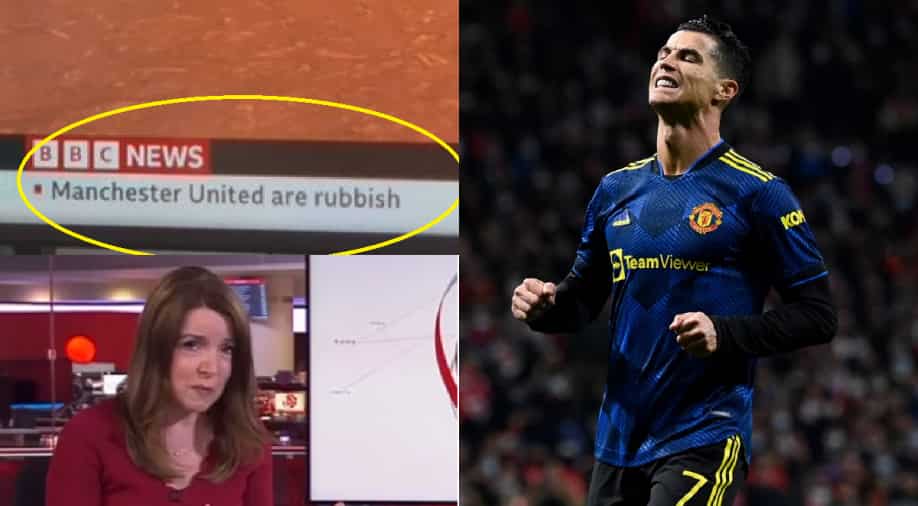 BBC had to issue an on-air apology after the message 'Manchester United are rubbish' was displayed on their news ticker during a live show on Tuesday (May 24).

BBC News issued an on-air apology to Manchester United fans on Tuesday (May 24) after a message ran on their news ticker calling the club 'rubbish'. United, who are one of the most successful clubs in English football, endured a disappointing campaign in the recently-concluded 2021-22 season as they failed to finish inside the top four in the Premier League. The pictures of BBC's gaffe during a live show soon went viral on social media inviting angry reactions from some United fans.

The incident happened during a live broadcast on Tuesday when the message 'Manchester United are rubbish' flashed up for a few seconds in the ticker. The ticker is a strip at the bottom of the screen which has current headlines running on it. BBC was quick to realise their mistake and issued an apology to those offended.

BBC presenter Annita McVeigh, who was presenting during the gaffe, read out an apology and revealed the message popped due to the mistake of a trainee, who was trying to learn how to use the ticker. McVeigh further said that the message was not supposed to appear on the screen.

“Just while we are on the subject of football, a little earlier some of you may have noticed something pretty unusual on the ticker that runs along the bottom of the screen with news. Making a comment about Manchester United and I hope Manchester United fans weren’t offended by it," said McVeigh as she apologised for the gaffe.

“Let me just explain what was happening. Behind the scenes, someone was training to learn how to use the ticker and to put text on the ticker so they were just writing random things. That comment appeared, so apologies if you saw that and we offended and you’re a fan of Manchester United. But certainly, that was a mistake and it wasn’t meant to appear on the screen," she added.

Errrr… what is going on with the BBC News ticker? pic.twitter.com/fofbiGyMfs

Apology by BBC News after a trainee, learning how to put text on the ticker (the headlines that run along the bottom of the screen) accidentally published the words "Manchester United are rubbish" live on the broadcast...

BBC also released an official statement following the ticker blunder and said there was a technical glitch during training with the test ticker which accidentally went live during the show.

“There was a technical glitch during training with our test ticker, which rolled over to live programming for a few seconds. We apologised for any offence caused on air," said BBC.

While the gaffe from BBC did not go down well with some fans, some saw the funny side to it and had fun at the expense of United, who were awful last season despite having one of the best squads in the Premier League. United struggled under both former manager Ole Gunnar Solskjaer and interim manager Ralf Rangick to miss out on a Champions League spot.

United will now look for a fresh start as they gear up to begin a new era under new manager Erik Ten Hag, who has arrived from Dutch club Ajax with an aim to help United get back among the best clubs in the world and dominate again.