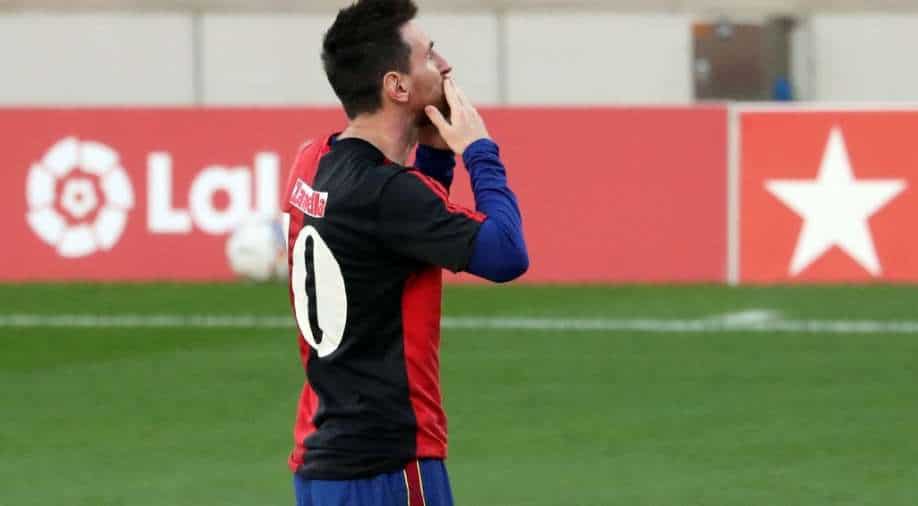 Messi looked emotional during the minute’s applause for Maradona, who passed away after suffering a cardiac arrest on Wednesday.

Barcelona star Lionel Messi was fined 600 euros ($720) for taking his jersey off to pay his tribute to former Argentine legend Diego Maradona who passed away last week due to heart attack, as per Spain's football federation said on Wednesday.

Lionel Messi was fined for his actions by the federation after the Argentine scored in Barcelona's 4-0 win over Osasuna in La Liga on Sunday.

Messi struck a Golazo from outside of the box to score the fourth goal for Barcelona. After which he took off his jersey to reveal a Newell’s Old Boys jersey Messi spent his formative years at Newell’s Old Boys, a team Maradona represented towards the end of his career.

Messi looked emotional during the minute’s applause for Maradona, who passed away after suffering a cardiac arrest on Wednesday.

Interestingly, this was his first open play goal this season as Messi took off his Barcelona jersey to reveal the same of Newell’s Old Boys with No. 10 on the back in tribute to Maradona. The six-time Ballon d’Or winner pointed to the sky while displaying the Newell’s kit as a show of emotion for Maradona. As per the rules, Messi was shown a yellow card for taking off his Barcelona jersey.

"We lost Maradona, a global idol, we all miss him," Coutinho said. "We didn't know what Messi had prepared to honour Maradona," added Griezmann. "It was a beautiful surprise."

Newell's responded through their English Twitter account, saying: "It's all about number 10. The best player in the world and his tribute to #D10S."

However, the Barcelona star also received a yellow card for doing so because taking off your jersey is a violation according to the FIFA rule book.