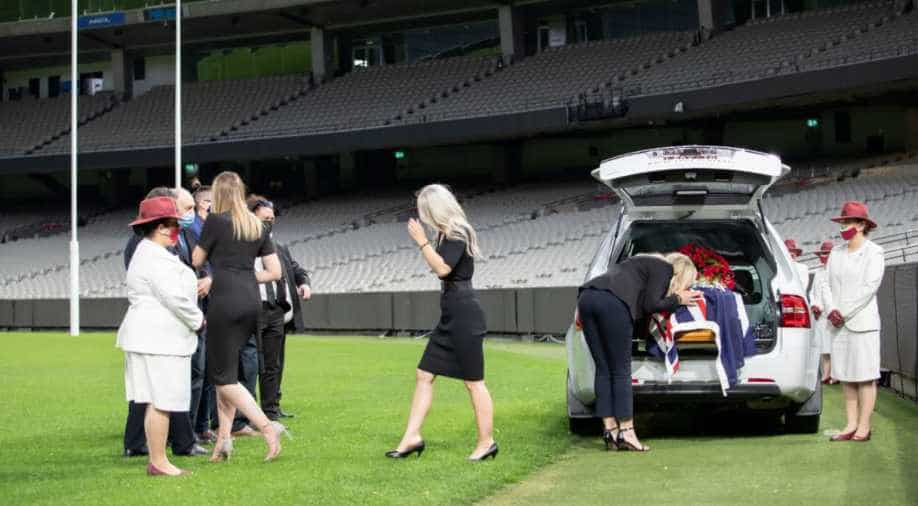 Former Australian cricketer Dean Jones was given a tribute at a small, private funeral over the weekend including a lap of the iconic Melbourne Cricket Ground as videos went viral on social media platforms on Wednesday.

Former Australian cricketer Dean Jones was given a tribute at a small, private funeral over the weekend including a lap of the iconic Melbourne Cricket Ground as videos went viral on social media platforms on Wednesday.

One of the icons of one-day cricket, Jones, 59, passed away last month after suffering a cardiac arrest at a hotel in Mumbai India, where was working as pundit for host broadcaster.

A hearse carrying Jones’ handmade Indian coffin, which was adorned with the Australian flag and floral ‘324’ – his Australian Test cap number – drove a lap around the empty MCG with Elton John’s ‘Rockey Man’ playing over loudspeakers.

Jones’ wife Jane, daughters Isabella and Phoebe along with his siblings were part of a small group at the ceremony.
The state of Victoria, of which Melbourne is the capital, has limited funeral services to 10 people amid COVID-19 restrictions.

One last lap of the @MCG for Deano, farewelled by ten of his closest family members over the weekend. Forever in our hearts! ❤️ pic.twitter.com/R2skRt2CkB

“We have been deeply moved by the outpouring of love for Dean over the last week and can’t thank everyone enough for their support and for sharing their memories with us,” Jane Jones said in comments published by Australian media.

“It has been an awful time to navigate as a family, but I could not have thought of a more fitting place to say goodbye to my husband.”

Jones, known lovingly as ‘Professor Deano’ by the cricket community, played 52 Tests and 164 ODIs, and will forever be regarded as the one to have changed the way ODI cricket is played. He was one of the successful members of Alan Border’s Australian side.