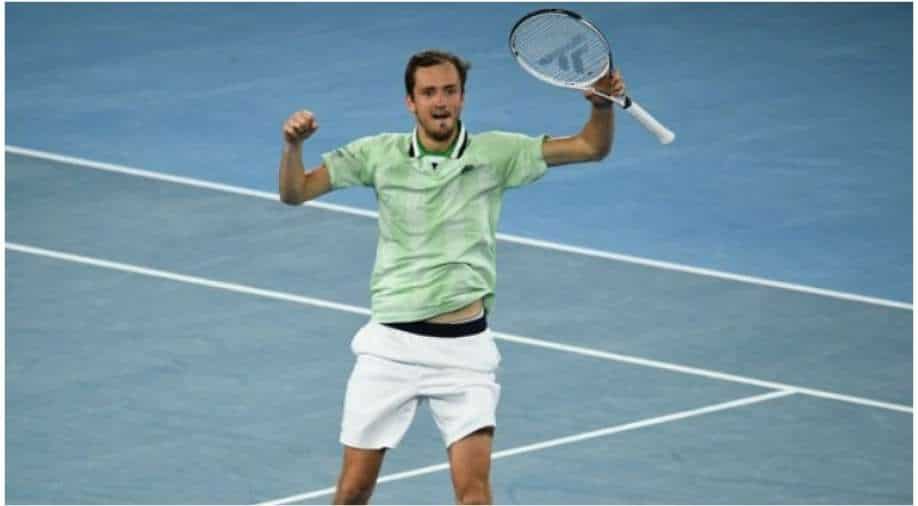 Medvedev battles back to down Auger-Aliassime in thriller Photograph:( AFP )

The 25-year-old Russian had his back firmly up against the wall for much of an absorbing contest as Auger-Aliassime produced some stunning tennis on Rod Laver Arena.

Top seed Daniil Medvedev battled back from two sets down and saved a match point against Canada`s Felix Auger-Aliassime to reach the Australian Open semi-finals with a 6-7(4) 3-6 7-6(2) 7-5 6-4 victory on Wednesday.

The 25-year-old Russian had his back firmly up against the wall for much of an absorbing contest as Auger-Aliassime produced some stunning tennis on Rod Laver Arena.

But he simply refused to lie down as he overturned a two-set deficit for only the second time in his career to set up a Friday semi-final against Greek Stefanos Tsitsipas.

Ninth seed Auger-Aliassime, 21, was the dominant player in the first set and despite a wobble when serving at 6-5 he won a tiebreak courtesy of some uncharacteristic Medvedev errors.

Auger-Aliassime cruised through the second set against a subdued Medvedev to move to within a set of a first career win against the Russian and a second Grand Slam semi-final.

Medvedev was hanging on towards the end of the third set as Auger-Aliassime sensed victory but managed to close out a tiebreak after a shower caused the roof to be closed.

Auger-Aliassime had a match point in the 10th game of the fourth set after a Medvedev double-fault but the Russian responded with huge serving to stay alive.

Medvedev then broke serve in the next game and held his own to extend the match into a decider -- finally seizing the initiative with an early break as the match entered its fifth hour.

Auger-Aliassime had one last chance when he earned a break back point trailing 4-3 but Medvedev snatched away the opportunity with a timely ace.

Serving for the match, Medvedev showed some cracks in his armour as he went down 15-40, but rattled off four consecutive points to claim victory after four hours and 42 minutes.