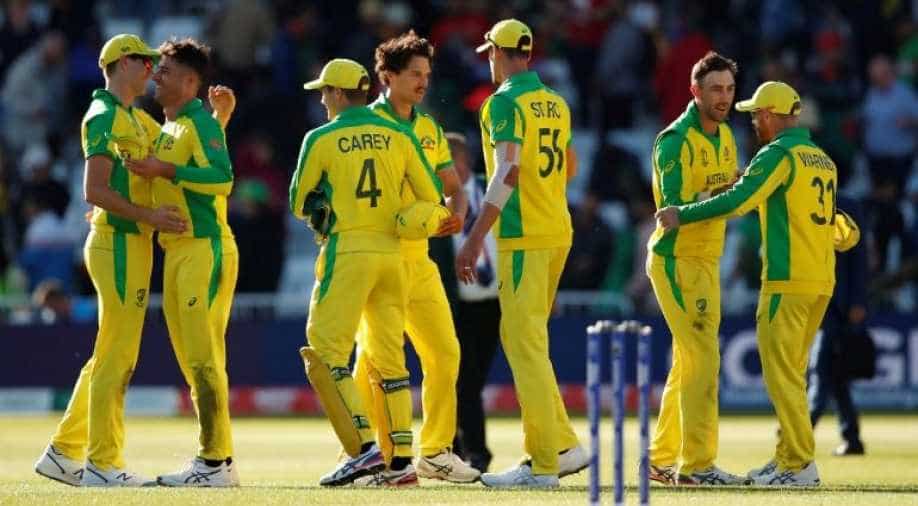 Australian team celebrating after the win against Bangladesh. Photograph:( Reuters )

Australia’s limited-overs tour of England has been confirmed and will commence from September 4. The limited-overs series between England and Australia consists of three ODIs and as many T20Is in what promises to be a cracking contest between two top sides.

Australia’s limited-overs tour of England has been confirmed and will commence from September 4. The limited-overs series between England and Australia consists of three ODIs and as many T20Is in what promises to be a cracking contest between two top sides.

Australian players have been handed government clearance to travel for the series as the Aussies pad up for their first internationals in nearly six months. Cricket Australia on Friday announced the squad for the limited-overs series with Glenn Maxwell, Nathan Lyon and Marcus Stoinis returning to the team while Usman Khawaja and Travis Head missed out.

Australia and England were originally scheduled to lock horns in July but the series was postponed due to COVID-19 pandemic.

Bio-security plans including government exemptions have been agreed, which are needed to Australians to leave the country while the team has also agreed to self-quarantine for 14 days after their return.

They depart from Perth on August 23 en route to Derby ahead of four practice matches -- three T20s and a one-dayer -- before three T20s and three one-day internationals in Southampton and Old Trafford, which have hotels on site.

"We are very excited to be heading to England and to get back into the international fray," said Cricket Australia's interim chief Nick Hockley.

"We congratulate the England Cricket Board on leading the resumption of the game in a way that places the health and safety of players and staff at its core."

"I am delighted with how the players have returned to their states from the break back in March. The whole squad has come back fitter and stronger, which is great testament to each of them," said coach Justin Langer.

"We have a massive assignment ahead with World Cups, Test series against India and South Africa and the Ashes next year. We can't wait to get back into it again."