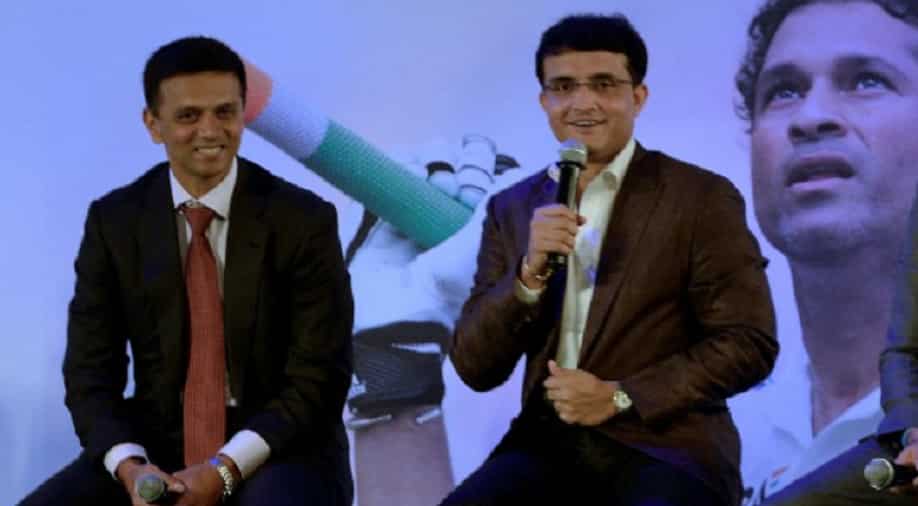 Sourav Ganguly revealed how he convinced Rahul Dravid to become the new head coach of the Indian team. Photograph:( AFP )

BCCI president Sourav Ganguly recently opened up on how he convinced Rahul Dravid to take up the Team India head coach role.

BCCI president Sourav Ganguly recently opened up on how he managed to convince Rahul Dravid to take up the Team India head coach role after Ravi Shastri's exit. Dravid had replaced Shastri as the head coach of the team after his tenure came to an post the conclusion of the T20 World Cup 2021.

Dravid was not sure about becoming the India head coach and the job requires him to travel around the globe for the most part of the year which would mean he would have to stay away from his family and young children. But Ganguly somehow managed to convince his former India teammate, who was serving as the head of the National Cricket Academy (NCA) in Bengaluru to become the new head coach of the Indian team.

"We had Rahul in mind for a long period of time, both me and Jay, but he wasn't agreeing because of the time away from home [and] because doing a national team's job is [about being] on the road for about 8-9 months in a year and he has two young children," Ganguly said on the show Backstage with Boria.

"At one stage we gave up, he was appointed as the head of NCA (National Cricket Academy, Bengaluru) to look after it and take things forward. We had done all the interviews and everything, his interview and application, and he was appointed at the NCA. But even after he was appointed, we still kept insisting." he added.

Ganguly further revealed that even the Indian players wanted someone like Dravid to become the head coach of the team post Shastri's exit and that he communicated that to the batting legend. Dravid eventually agreed to take up the top job but Ganguly admitted he didn't know what triggered the change.

"And when we spoke to the players also [about] what sort of person they want, you could clearly see that, you know, there was an inclination to Rahul so we communicated that to him. I spoke to him personally many times [saying] that, 'I know it's hard but give it a try for two years, and if you find it too hard then we'll see another way'," Ganguly said on the show.

"Luckily he agreed and I don't know what triggered the change in his mind but he agreed and I think this is the best BCCI could have done in terms of coaching once Ravi [Shastri] left," he added.

Dravid replaced Shashtri as the new head coach after India's exit from the T20 World Cup 2021 and helped them whitewash New Zealand 3-0 in the home T20I series which was his first major assignment as the coach.