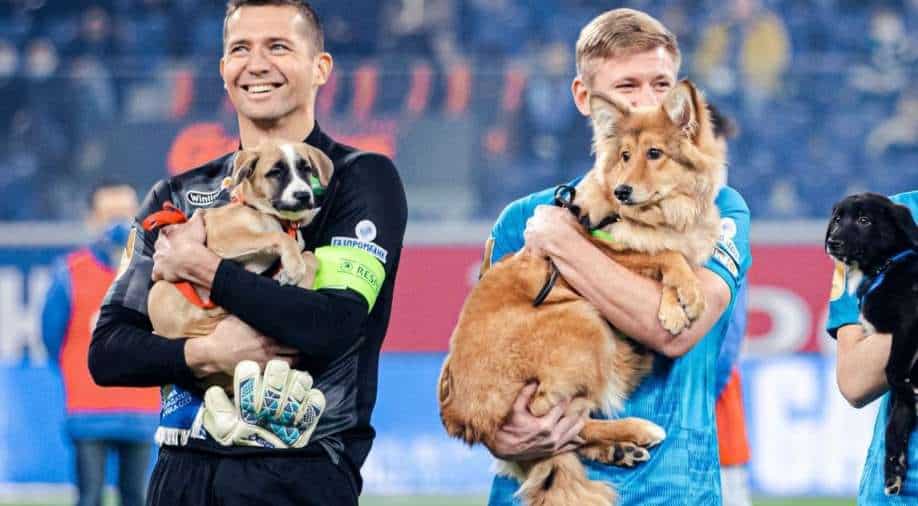 The club thanked followers for their support and appreciate the players. Photograph:( Twitter )

Players of Zenit Saint Petersburg, which is a Russian professional football club, took to the pitch at the Gazprom Arena accompanied by adorable dogs from local shelters. The dogs are looking for a new home.

In an attempt to promote pet adoption, players walked on the pitch with cute furry friends in arms before their Russian Premier League match against FC Rostov on December 3.

The official website of Zenit states that all the dogs are several months old and can be adopted by request. As per the Russian shelters association's 'Animals wellness', there were over 600 thousand stray dogs in Russia in 2020.

The Zenit players took to the pitch at the Gazprom Arena this evening accompanied by dogs from local shelters looking for a new home 🐶💙pic.twitter.com/bjFTvntw3i

The video has gone viral on social media forums and netizens are appreciating the kind gesture of the club for an important cause. The particular video of players walking out while accompanied by the dogs has already been viewed 3.4 million times as of Sunday (December 5) evening on Twitter.

The club thanked followers for their support and appreciate the players. Zenit wrote: "Now let's find homes for these good boys and girls. The aim of the project is to highlight to the public the responsibility and care required when having a pet and to help raise funds for local dog shelters."

As far as the match is concerned, it ended as a 2-2 draw but Zenit remains top of the standings on 37 points. They are five clear of second-placed Dynamo Moscow.