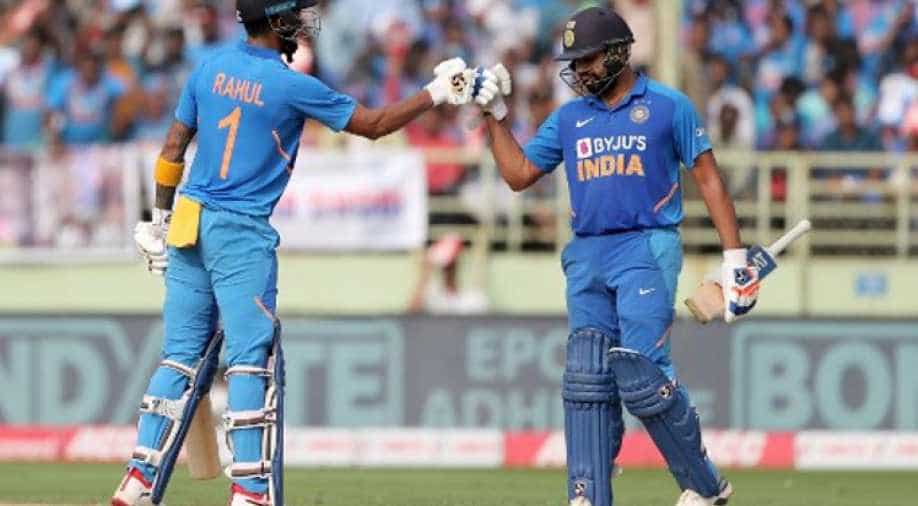 The hosts scored 137 runs in the last 10 overs, 93 of them in the last 6 as Rishabh Pant and half-centurion Shreyas Iyer smacked the Windies bowlers all over the park.

India beat West Indies by 107 runs in the second one-day international to level the series at Visakhapatnam on Wednesday.

Batsmen Rohit Sharma(159) and KL Rahul(102) were the stars of the show putting on a record breaking 227-run opening partnership followed by Kuldeep Yadav who took a hat-trick as the visitor's crashed to defeat.

Earlier, West Indies opted to field first for the second game in succession but unlike the first ODI there was no Indian top-order collapse instead Rohit Sharma and KL Rahul shared a mammoth 227-run partnership for the first wicket at better than a run-a-ball despite largely batting within themselves.

Rahul was the aggressor early on, but Rohit caught up - as he usually does - later in the innings and brought up his 28th one-day century from 108 balls. Two overs later, Rahul got to his third one-day ton to continue a rich recent vein of form but was dismissed by al-zari Joseph for 102.

Captain Virat Kohli then fell to a rare first-ball duck to the bowling of his opposite number Keiron Pollard - but it did not dent India's momentum.

The hosts scored 137 runs in the last 10 overs, 93 of them in the last 6 as Rishabh Pant and half-centurion Shreyas Iyer smacked the Windies bowlers all over the park to lead India to 387 for 5.

West Indies started well, reaching 56 for no loss after the first 10 overs, but fell away after Evin Lewis fell to Thakur. Hope(78) and Pooran(75) were the only stand-out batsmen along with Paul who scored 46 as the West Indian innings folded at 280 in just 43.3 overs.

Kuldeep Yadav's hat-trick propped up the hosts as India closed the match on a high. Rohit Sharma was declared the man of the match.