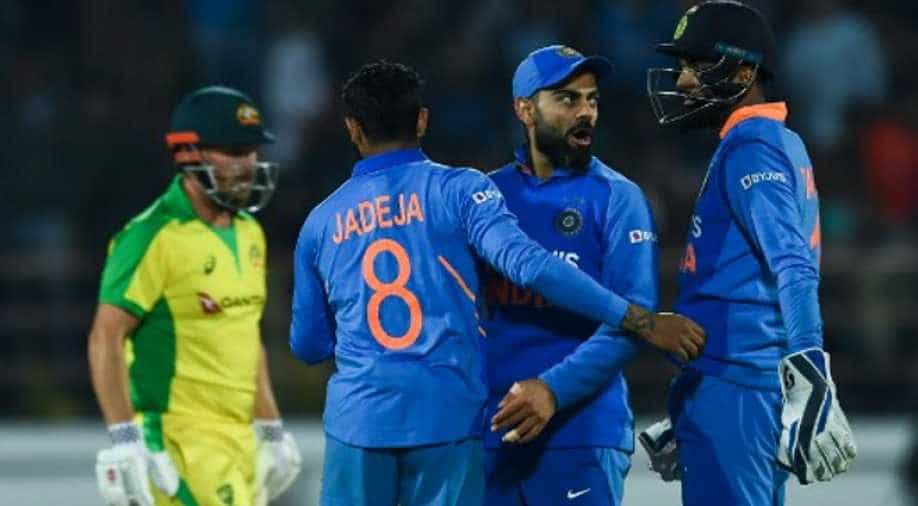 The Indian bowlers spearheaded by Mohammed Shami played their part as Australia failed to reach the 341-run target set by India.

Shikhar Dhawan's brilliant 96 along with Rohit Sharma(42) and skipper Virat Kohli's(78) with a late surge by KL Rahul(80) helped India to clinch the second one-day international against Australia at Rajkot on Friday.

The Indian bowlers spearheaded by Mohammed Shami played their part as Australia failed to reach the 341-run target set by India with the hosts succumbing 36 short with the visitor's folding up for 304 in 49.1 overs.

Shami was the pick of the bowlers dismissing danger man Warner early with Australia on 20, and then later in the innings grabbed Turner(13) and Cummins(0) as the Australians failed to keep their 10-wicket winning momentum from the first ODI at the Wankhede.

The Australians bowlers were blunted by Shikhar Dhawan's prowess as the Indian opener hit a near run-a-ball 96 in just 90 balls studded with 13 boundaries and one six to take the initiative away from Australia.

The Indian opening pair added 81 for the first wicket in 13 overs serving as a launchpad for India's huge score. Dhawan shared an equally important partnership with skipper Virat Kohli who hit 78 in just 76 balls with six boundaries in a 97-run partnership to put India on top.

Even though Shreyas Iyer fell cheaply for 7 falling to Zampa, the Australians bowlers failed to capitalise.

KL Rahul provided the icing on the cake with a superb 82 in 52 balls in the end overs demolishing the Aussies. KL Rahul hit six boundaries and three sixes to put India in an unassailable position. India's only disappointment was Manish Pandey who failed to click falling to Richardson for just 2 runs.

Zampa was the pick of the Australian bowlers scalping three Indian wickets with Stac proving the most expensive bowler giving away 78 runs in his 10 overs without picking up a wicket.

The Indian bowlers made merry at Rajkot with each bowler claiming wickets - Bumrah(1 wicket), Shami(3 wickets), Saini(2 wickets), Jadeja(2 wickets) and Kuldeep Yadav(2wickets) as the hosts avenged the battering by the Aussies suffered in the first ODI.

Although Smith narrowly missed his ton falling just two runs short hitting 98 in 102 balls with nine boundaries and a six and Labuschagne charging 46 in 47 balls with 4 boundaries but Australia were never seriously in the fight.