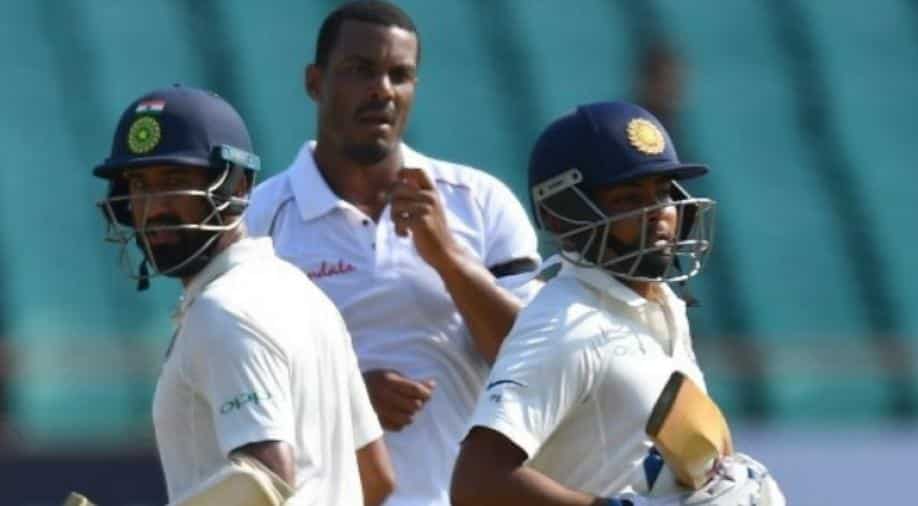 Prithvi Shaw went on to slam a century in his debut game on Thursday against West Indies at Rajkot. However, the young sensation departed after giving a simple catch in the hands of Devendra Bishoo.

The right-handed batsman made 134 runs, which included 19 boundaries. He took 99 balls to reach the three-digit mark on Thursday.

Despite losing their first wicket in the very first over, India managed to get back on the track and put a score of 133 runs for the loss of one wicket at lunch.

The credit goes to debutant Prithvi Shaw and one-down Cheteshwar Pujara, who slammed a half-century each, to put India in the controlling situation in Rajkot.

Shaw, on his playing his debut game, took 56 balls to reach his first-half-century. His shots selection and timing didn't reflect him as a debutant but a player who was waiting for a right platform to display his cricketing prowess.

Supported by veteran Pujara, who also slammed a gritty half-century, India managed to recover from the early loss.

Both Shaw and Pujara, are well settled on the crease and are playing at 75 and 56 respectively.

KL Rahul, on the other hand, lost his wicket in the first over. He was sent back to the pavilion for a duck after being lbw by Shannon Gabriel.

Prithvi, who earned a maiden Indian call-up midway into the England tour but did not get a game, has been preferred over Mayank Agarwal in the playing XI for the series opener against West Indies.