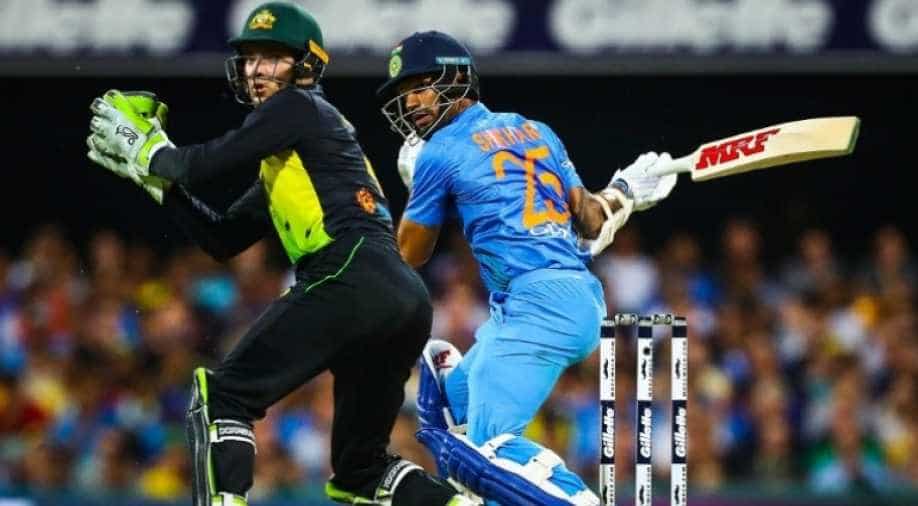 India suffered a four-run defeat at the hands of Australia while chasing a huge 174-run target set by D/L method after the first T20I was reduced to 17 overs due to rain.

Opener Shikhar Dhawan, who went on to slam a half-century, departed minutes after skipper Virat Kohli lost his wicket in the huge 174-run chase in the first ODI.

Dhawan lost his wicket while trying to hit a six off Stanlake. He made crucial 76 runs which included 10 boundaries and 2 sixes.

Earlier, Rohit lost his wicket cheaply in the huge174-run chase, a target set for the Men in Blue due to D/L method after rain interrupted the 1st T20I between India and Australia and the game was reduced to 17 overs per side.

The Virat Kohli-led side are 61 for the loss of a wicket after seven overs.

The Australian had posted 158 runs for the loss of our wickets after 17 overs.

Kuldeep Yadav was picked ahead of Yuzvendra Chahal as expected, while the hosts also included a spinner in Adam Zampa and left out medium pacer Nathan Coulter-Nile.

Bhuvneshwar Kumar (0-15) and Jasprit Bumrah (1-21) got India off to a good start but Aaron Finch (27) pulled things back a bit. Khaleel Ahmed (1-42) got the initial breakthrough as D'Arcy Short (7) was caught at long on. The left-arm pacer proved expensive thereafter.

Kuldeep took a sensational catch running back to dismiss Short, and from there onwards, he had a marked influence on the game.

Later, he also picked up 2-24 in his four-over spell. He dismissed Finch and then sent back Lynn as well, reducing Australia to 75-3 in the 11th over.

Apart from Yadav's stunning effort, India were rather poor in the field. Skipper Virat Kohli had dropped Finch in the fourth over.