What's in the landmark US-Taliban deal? 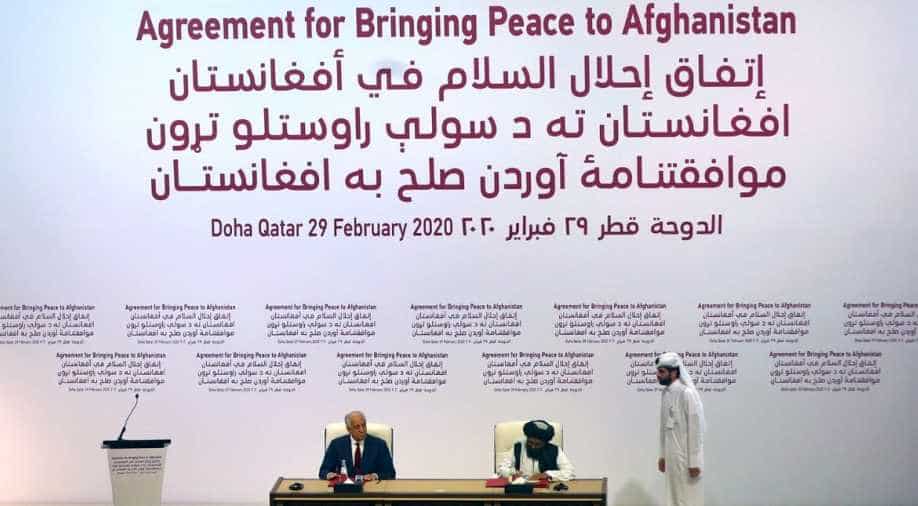 Abdul Ghani Baradar, the leader of the Taliban delegation, signs an agreement with Zalmay Khalilzad, US envoy for peace in Afghanistan, at a signing ceremony between members of Afghanistan's Taliban and the US in Doha, Qatar. Photograph:( Reuters )

Here are key elements of the hard-sought agreement, which took shape over more than a year of fractious negotiations.

The US and the Taliban on Saturday signed a complex deal that aims to bring to an end to the longest war in America's history.

Here are key elements of the hard-sought agreement, which took shape over more than a year of fractious negotiations.

Washington and its allies are set to withdraw all of their forces from Afghanistan within 14 months if the Taliban abide by the terms of the agreement.

Initially, the US will draw its troop levels down to 8,600 within 135 days of Saturday's signing, while completely removing forces from five military bases.

The US military currently has about 20 bases of varying sizes across Afghanistan, a US defence official said.

If the deal continues to hold, then the US and its partners will complete the "withdrawal of all remaining forces from Afghanistan".

In the future, the US will also refrain from threatening or using force against Afghanistan or intervening in its "domestic affairs".

The deal also stipulates that talks between the Taliban and all "Afghan sides" will commence March 10.

The exact makeup or who exactly will represent the Afghan team is not spelt out.

The deal also says a ceasefire will only be an "item" on the agenda of the talks, falling short of making it a compulsory component.

According to the agreement, the participants of the talks "will discuss the date and modalities of a permanent and comprehensive ceasefire".

The US and the Taliban also agreed to swap thousands of prisoners in a "confidence-building measure" set to coincide with the beginning of talks between the Taliban and the Afghan team.

The US also pledged to begin reviewing the current list of sanctions targeting Taliban leaders and members, with the goal of removing these measures by August 27, 2020.

Washington said it would also start "diplomatic engagement" with members of the UN Security Council and the Kabul government to remove the Taliban from sanctions lists.

The deal also calls on the Taliban to prevent groups, including Al-Qaeda, from using Afghanistan as a base to threaten the security of the US and its allies.

The Taliban will prevent such groups from "recruiting, training and fundraising" and will not host them in Afghanistan, the accord states. It also bars the Taliban from providing them with travel and legal documents.

The agreement does not specify that the Taliban publically disavow and officially cut ties with Al-Qaeda.

Even so, US Secretary of State Mike Pompeo called on the Taliban in Doha on Saturday "to honour its commitments to sever ties with jihadist groups."

The deal concludes with the US and Taliban pledging to seek "positive" relations with each other, along with whatever government comes out of intra-Afghan talks.

And the US promises to "seek economic cooperation" for the reconstruction of the war-torn country with the "new post-settlement" government in Kabul.