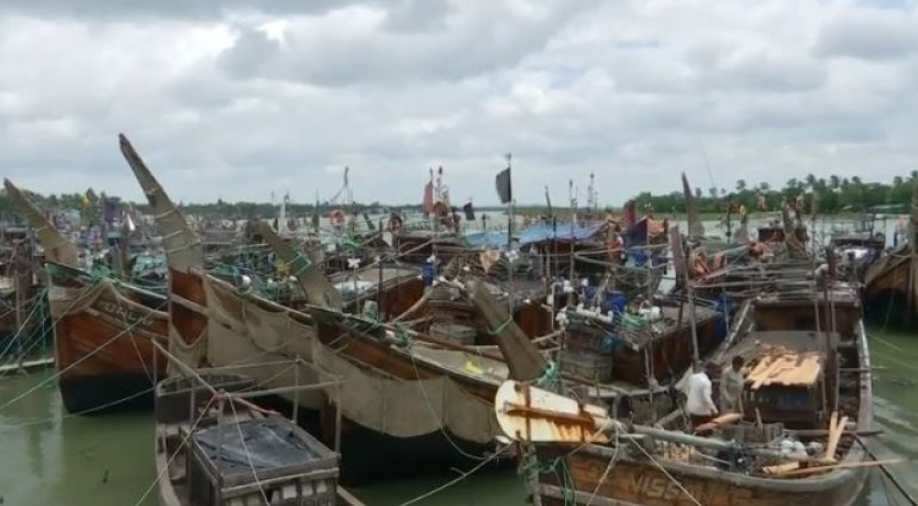 Bangladesh has, for the first time, imposed a fishing ban from May 20 to July 23 to help boost marine fish stock and to tackle overfishing during a key breeding season for many food fish in the Bay of Bengal.

A 65-day ban on fishing from the sea in Bangladesh is impacting not only the vulnerable fishermen but also the whole supply chain -- from traders to boat owners to fish factories and their workers across the country.

Bangladesh has, for the first time, imposed a fishing ban from May 20 to July 23 to help boost marine fish stock and to tackle overfishing during a key breeding season for many food fish in the Bay of Bengal.

A month after the ban was enforced, fishing boats are sitting idle at the Bakkhali River bordering Cox's Bazar, while the fishing harbour is void of any marine vessel. Up in the jetty, workers are repairing their nets and patching their fishing boats, in anticipation of the ban being lifted in another month's time.

But many of these fishermen and related odd-job workers were simply filling their time, with virtually no other skills to make a living.

"Now we cannot go to the sea for fishing so we are repairing our fishing nets. After a month we will go fishing," said fisherman, Mohammad Shahadat. He is one of the 80,000 fishermen working with 4,000 fishing boats in Cox's Bazar.

Next to the fishermen, traders were haggling over prices for fish -- but these were all frozen fish, caught months before and being sold now to supply local markets.

Bangladesh's coastal districts are home to about 20 million people, the majority of which are directly or indirectly dependent on the fishing industry. Local media reported that the ban has hit the livelihoods of hundreds of thousands of people.

"These are my boats but at the moment I cannot take my boats out for fishing. I am facing a problem because I am unable to pay my workers' (fishermen) salaries as I don't have any income. Now all the workers are jobless," said boat owner, Mohammad Jashim.

Further down the seafood supply chain, in Naziratek -- the industry's biggest dried fish yard in Bangladesh -- the owner of a dried fish factory is looking at rows of empty racks, the likes of which were once heaving with between 5 million and 6 million tonnes of dried fish at peak fishing season.

"We are not getting fresh fish so we are marketing the dried fish from our old stock," said the factory owner Abdul Aziz.

In the past, Bangladesh had imposed short-term bans on fishing, mainly on large commerial fishing trawlers, but this is the first long-term ban, which will also include all fishing boats, such as small and artisanal fishermen. "From 20th May to 23rd July is the main breeding period, so at this time fishing was banned in the sea. Overfishing has caused shortage of fishes," said Saiful Islam, Manager at Bangladesh Fisheries Development Corporation.

The department of fisheries will also provide 400,000 coastal fishing families with 40 kilograms of rice per month to help out-of-work fishermen.

Bangladesh is a key supplier of fish to the global market, producing about four million metric tonnes of fish in 2016, according to World Bank data.